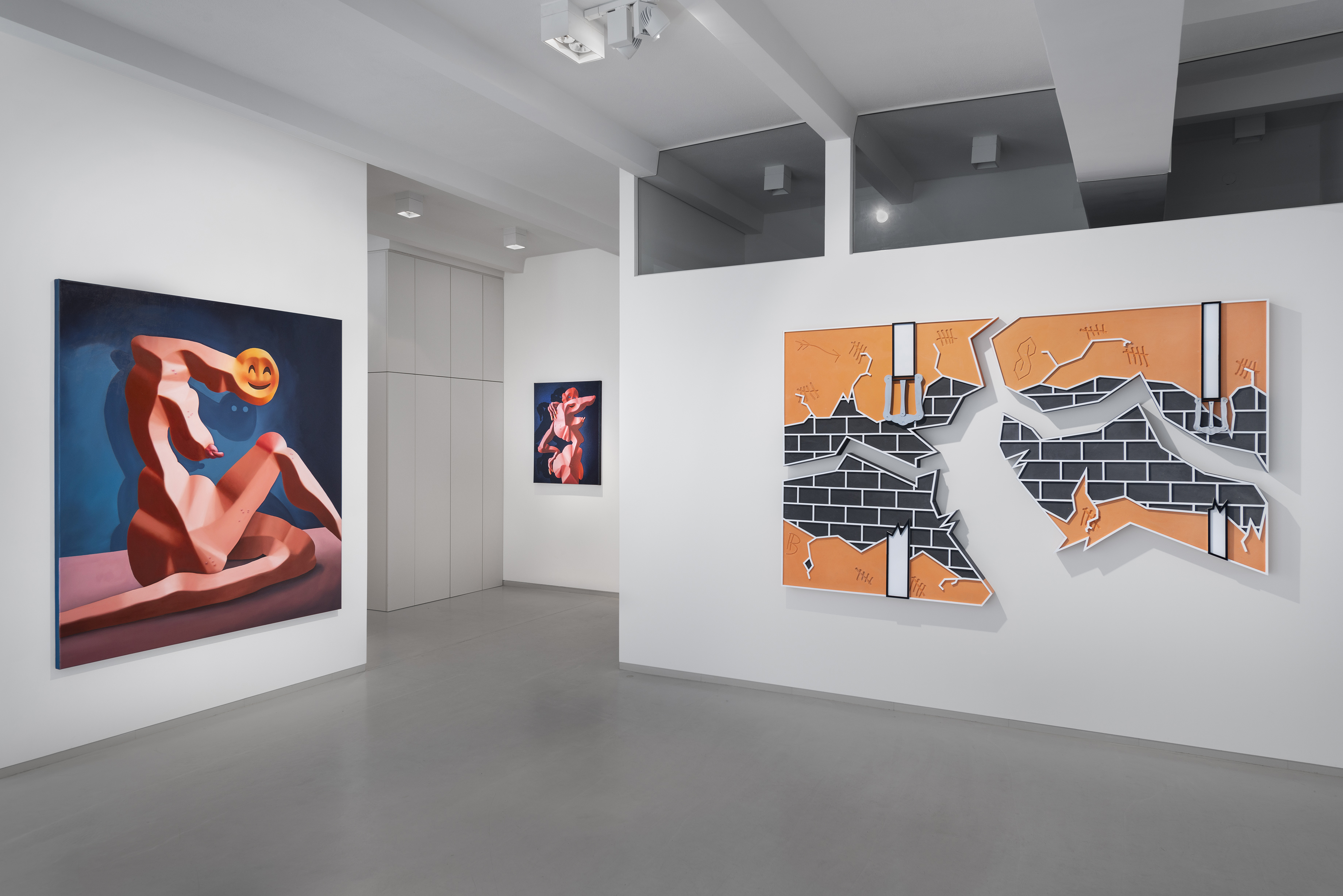 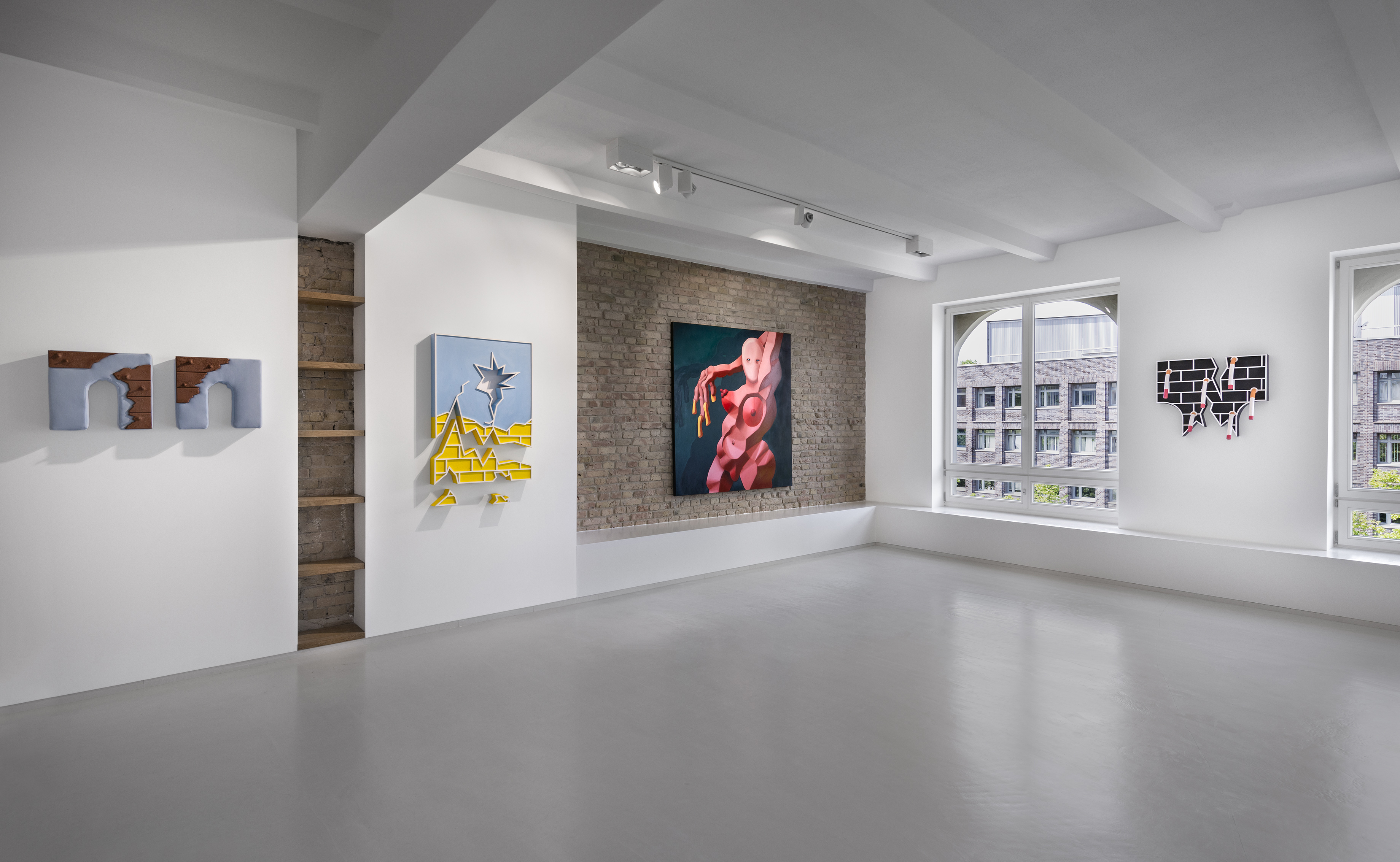 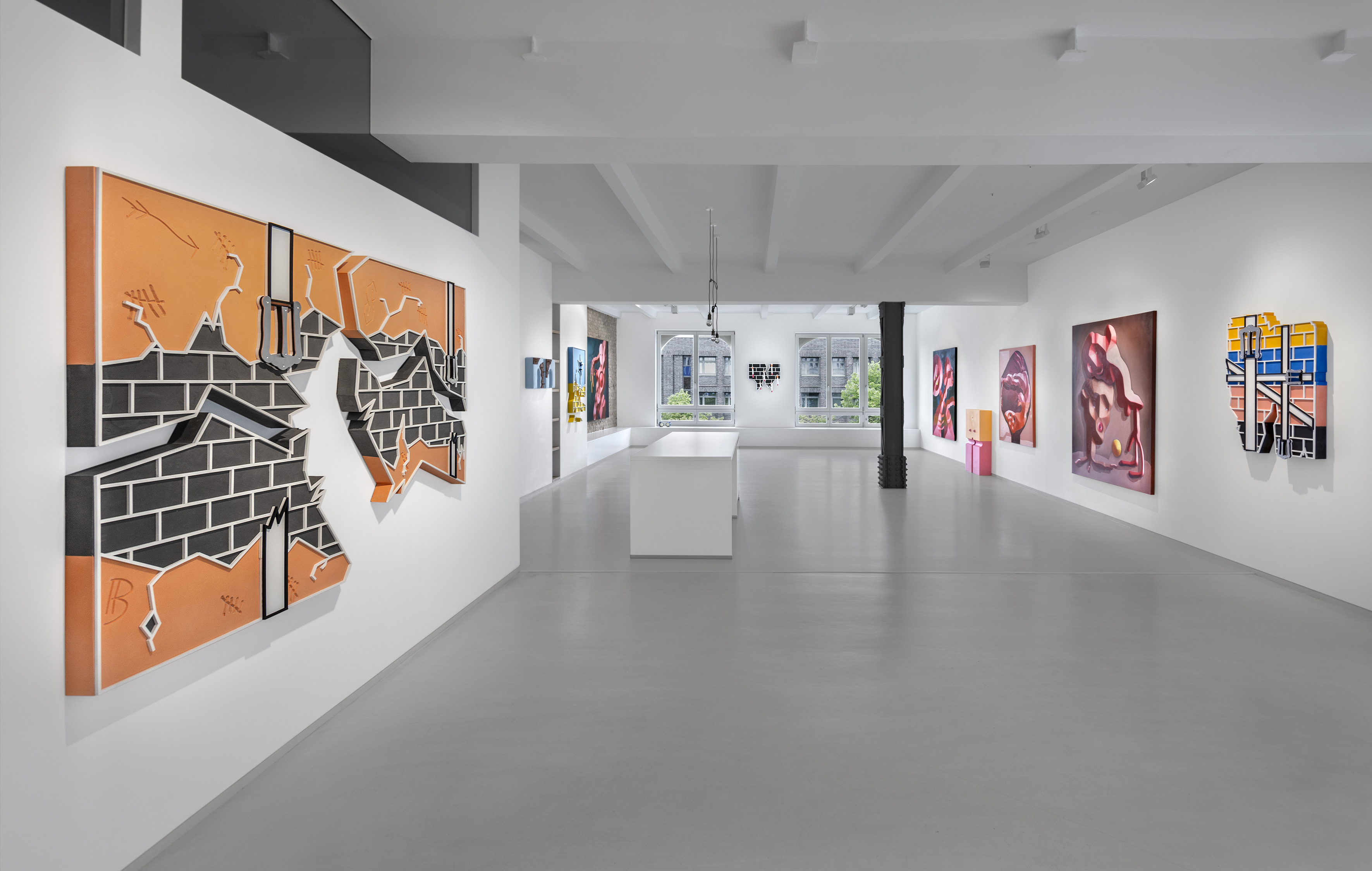 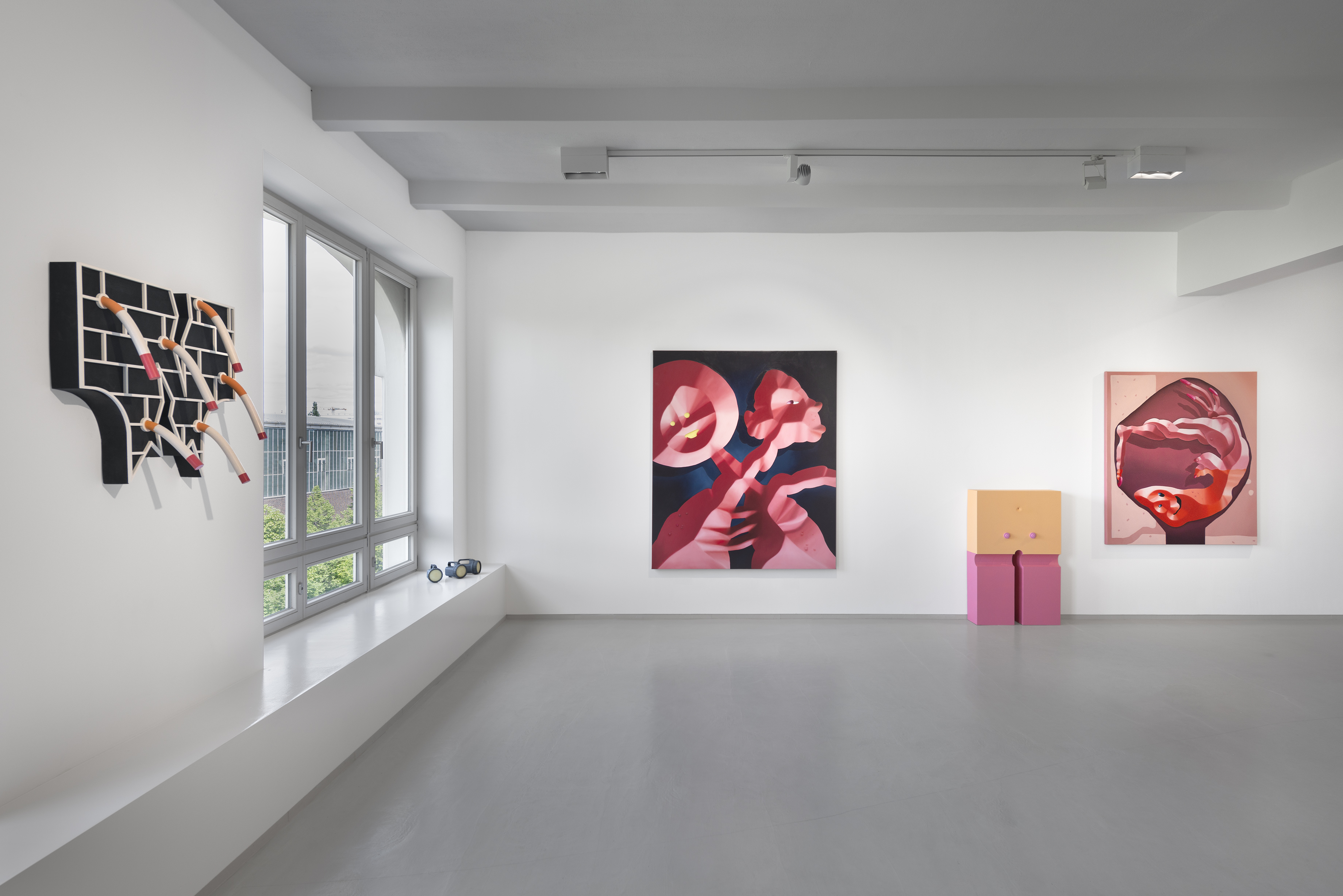 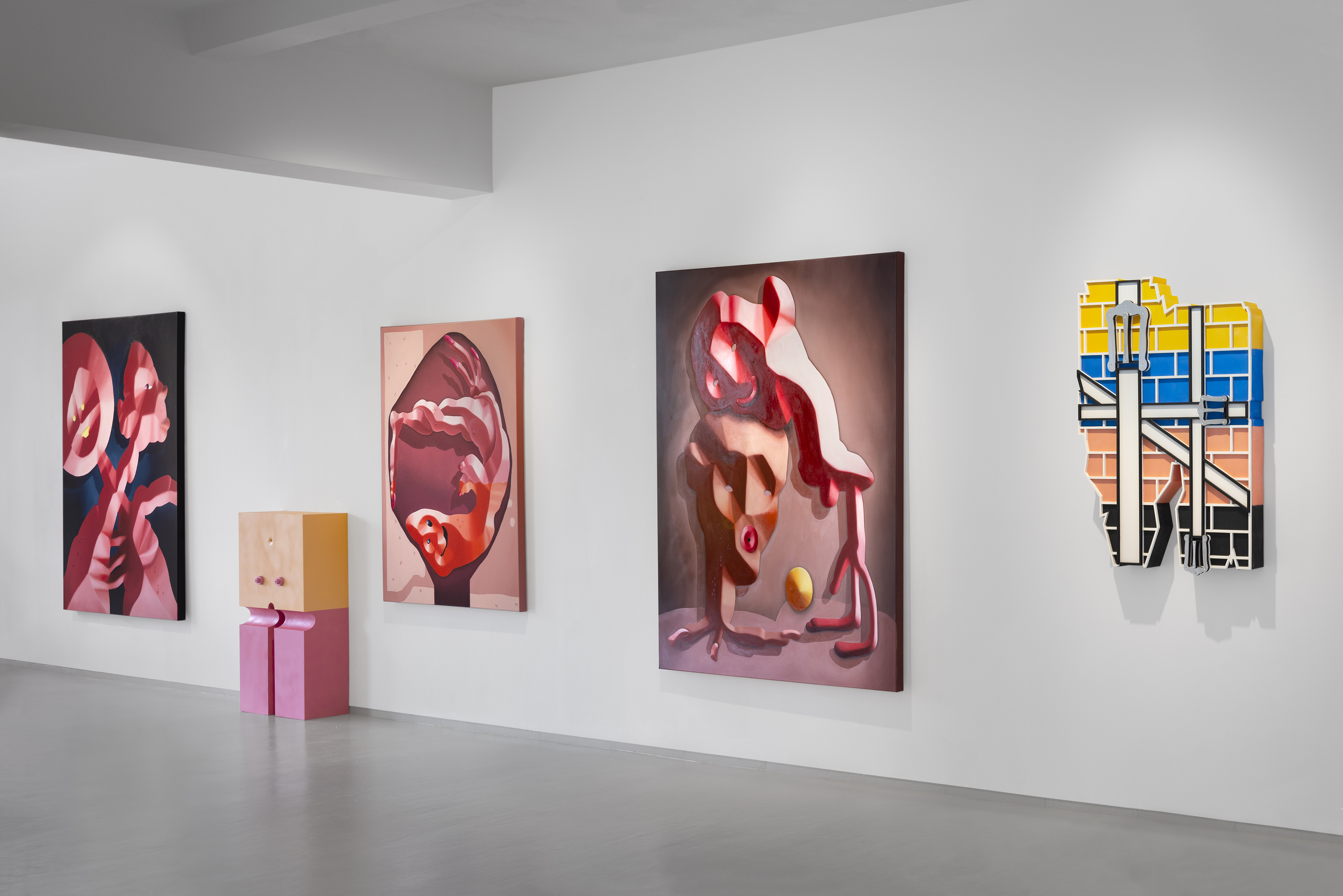 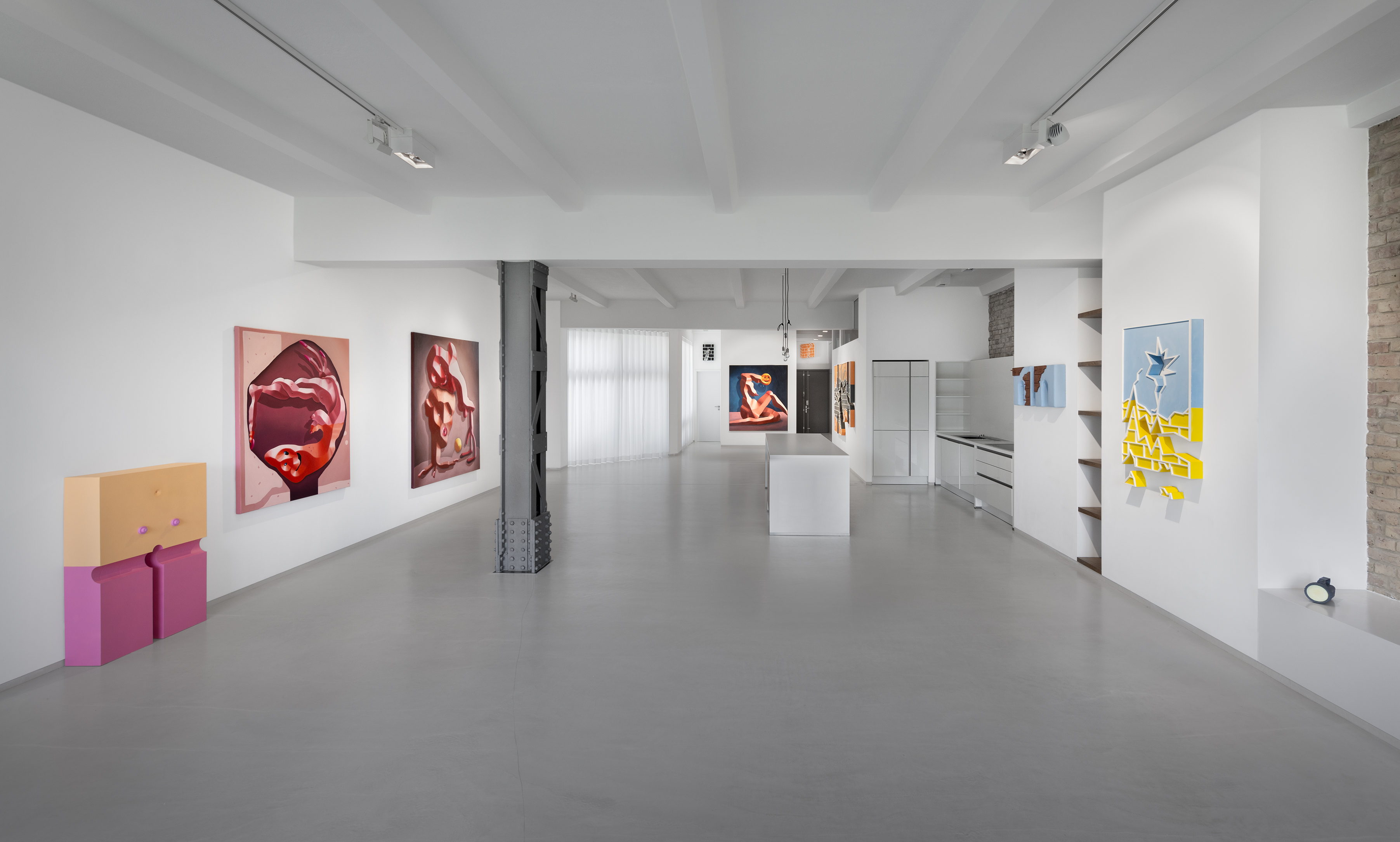 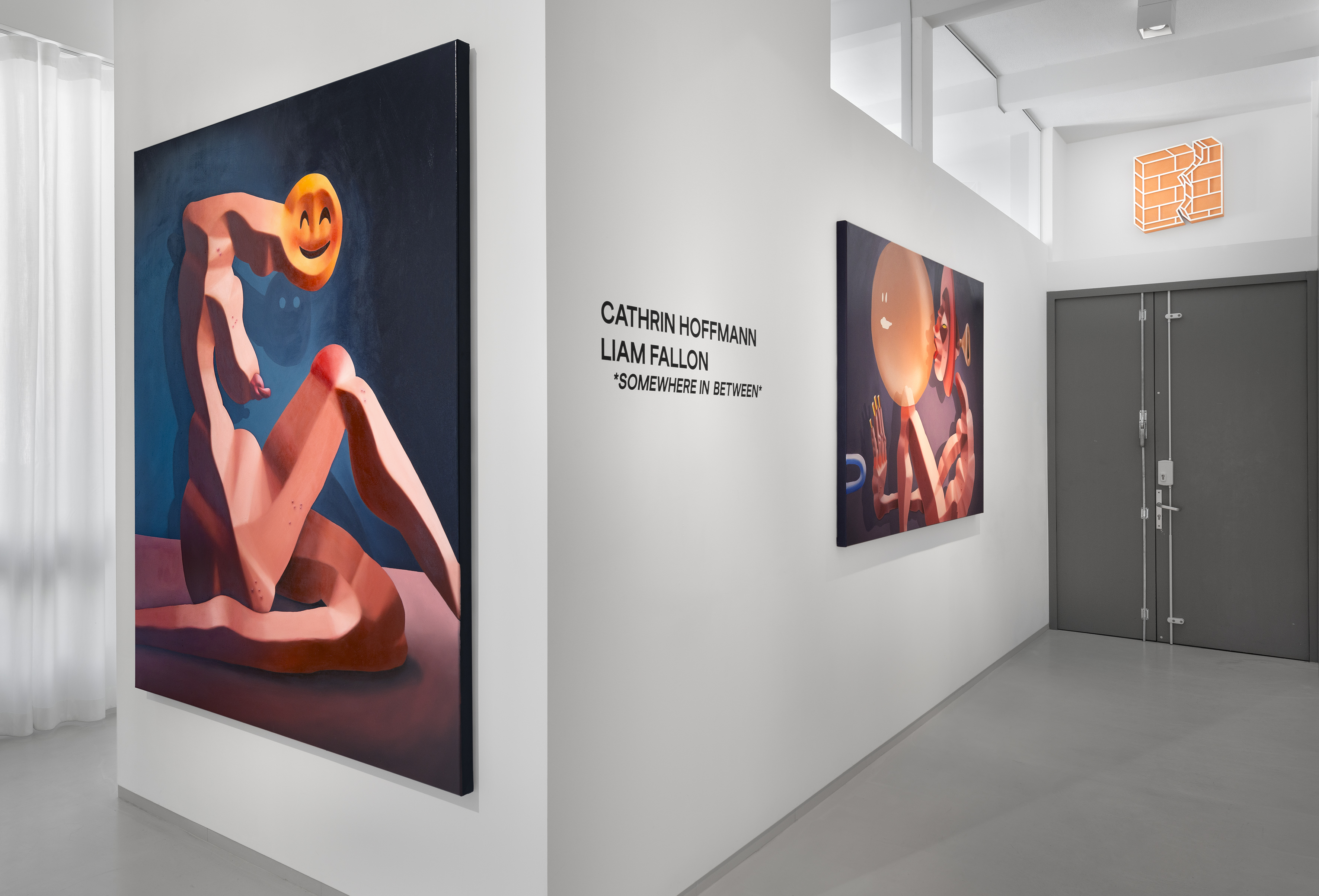 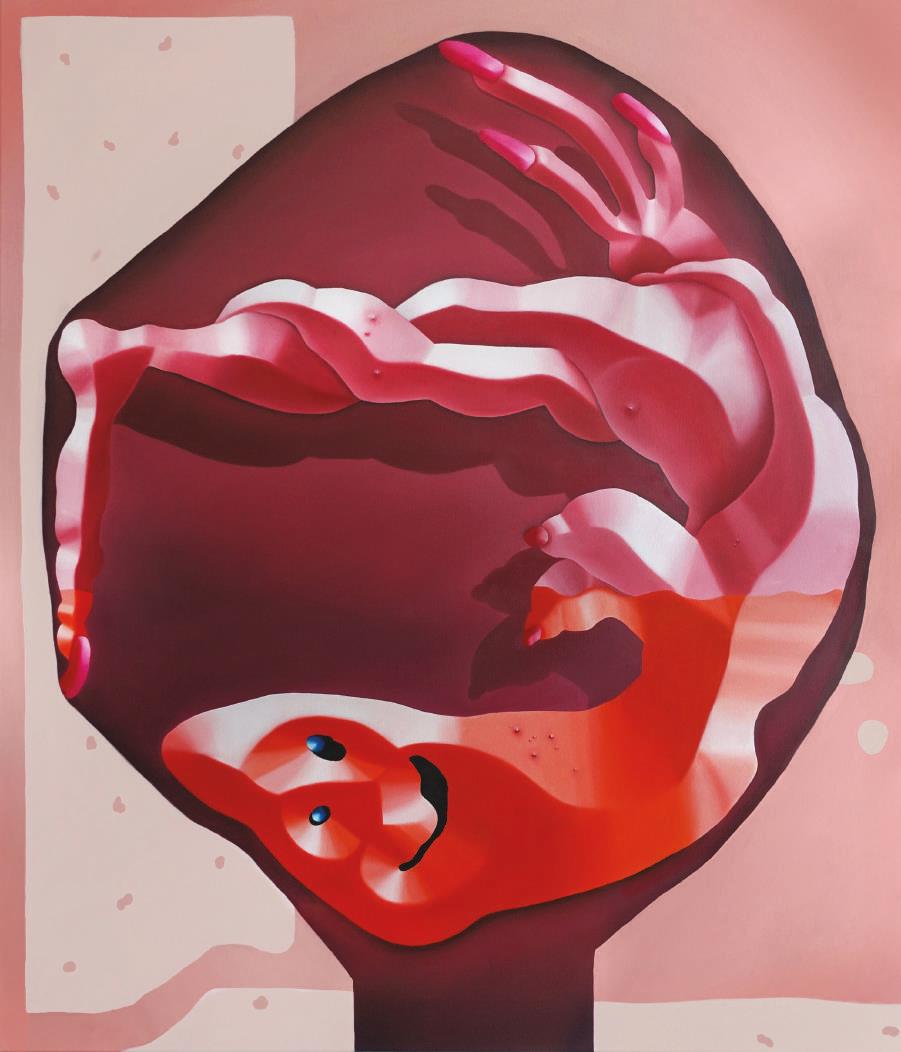 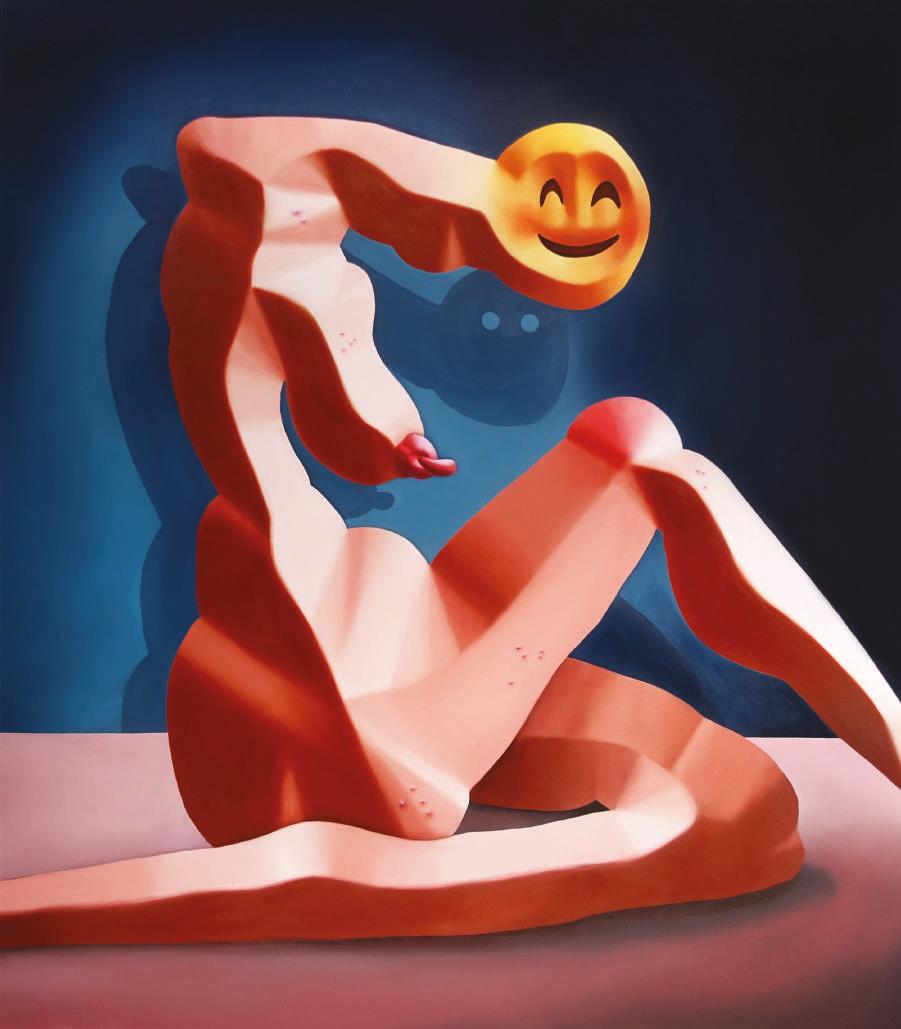 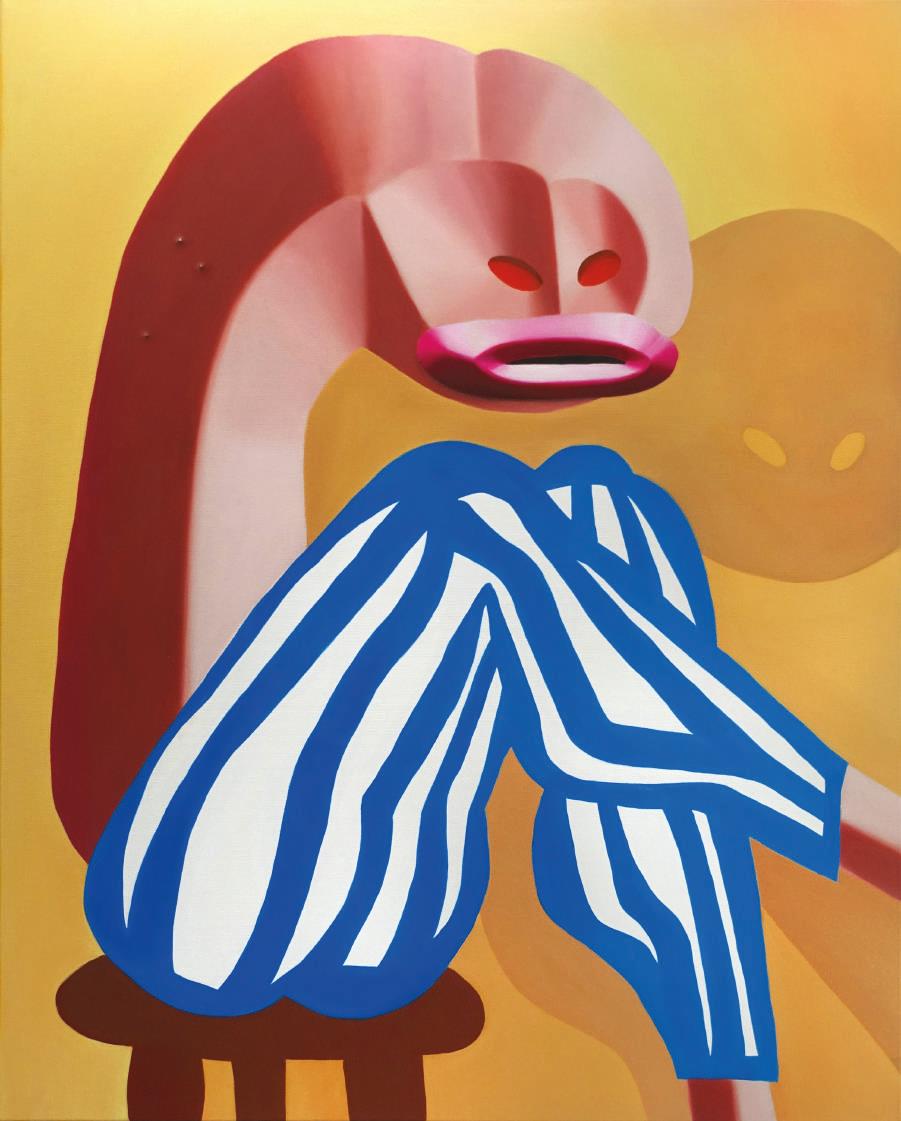 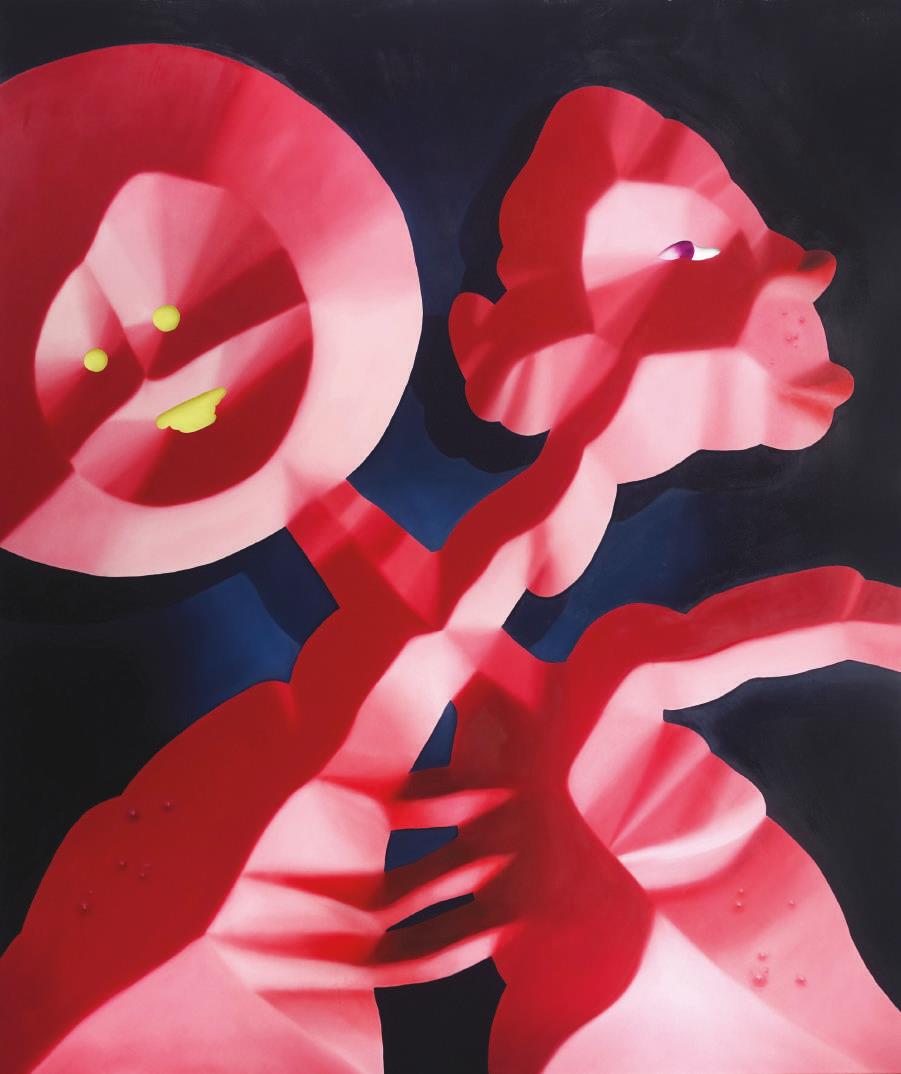 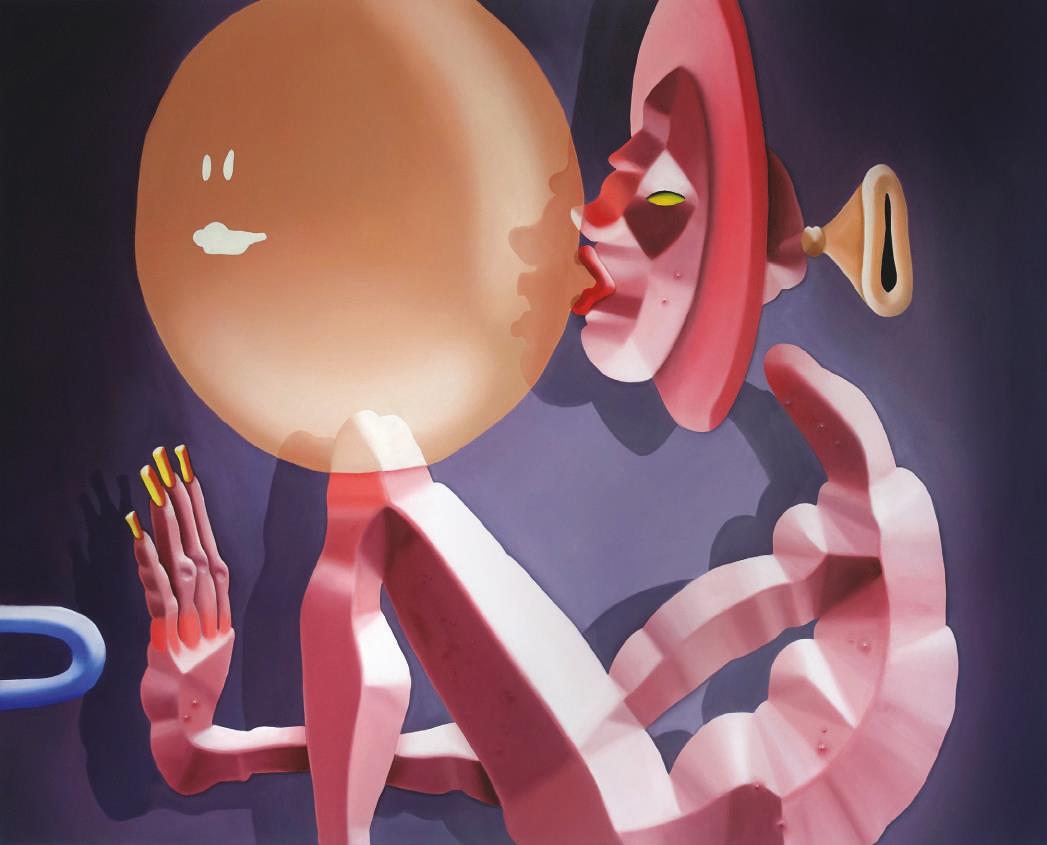 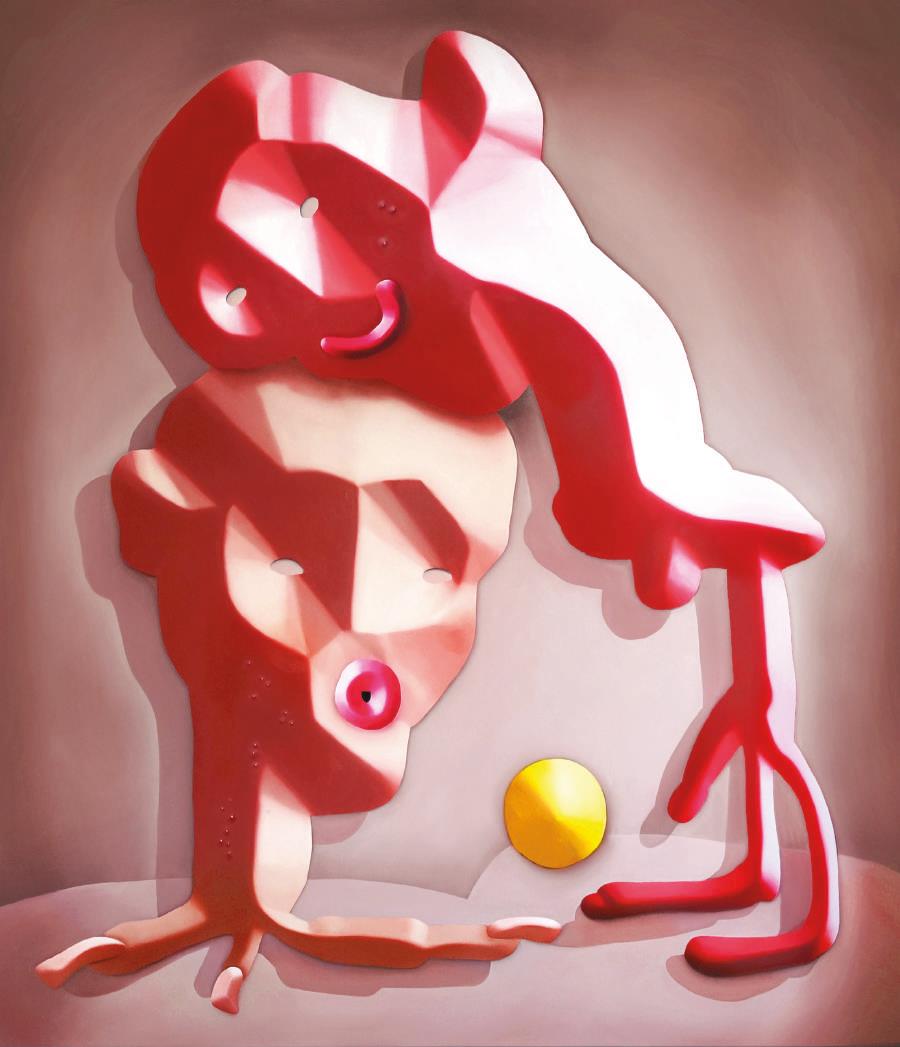 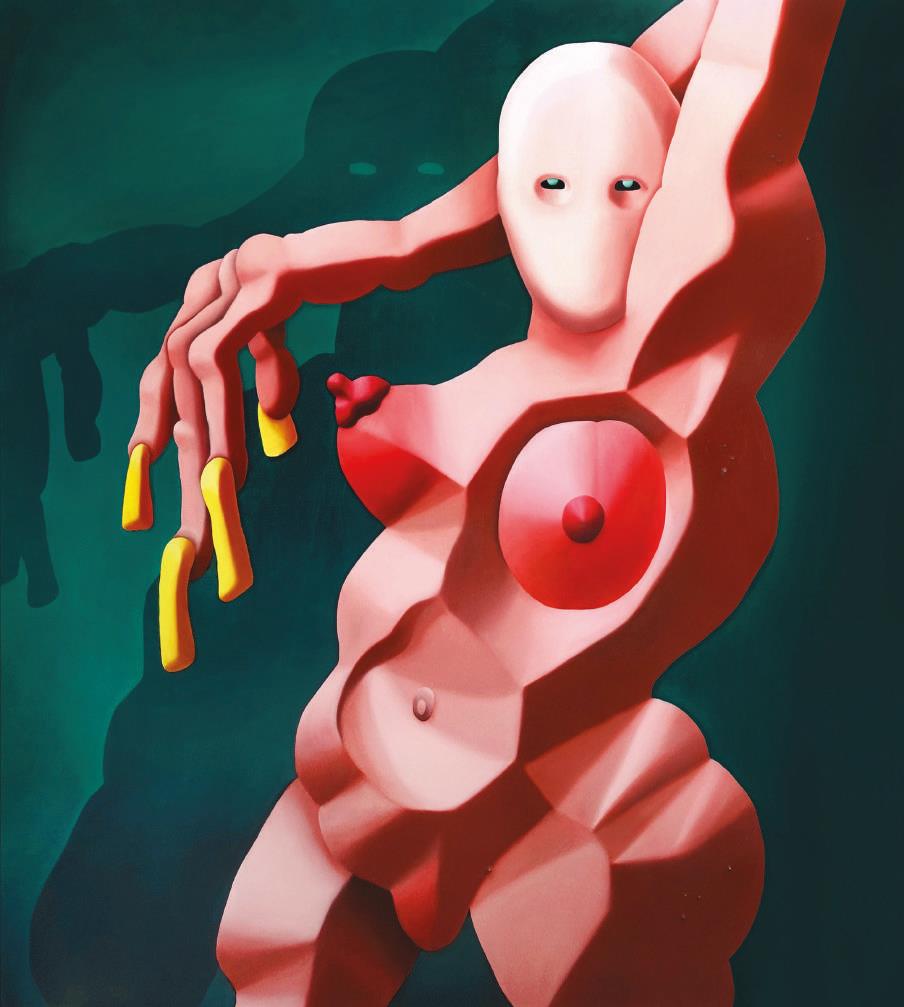 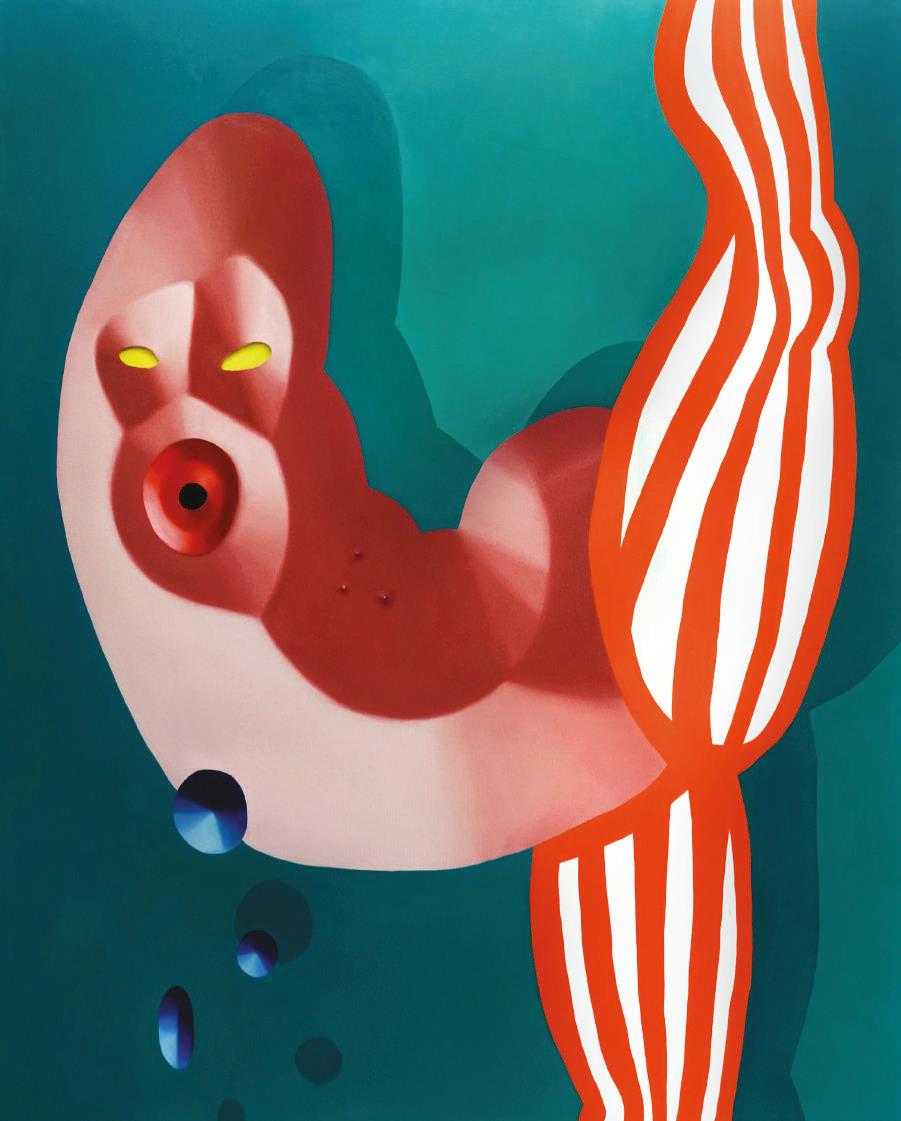 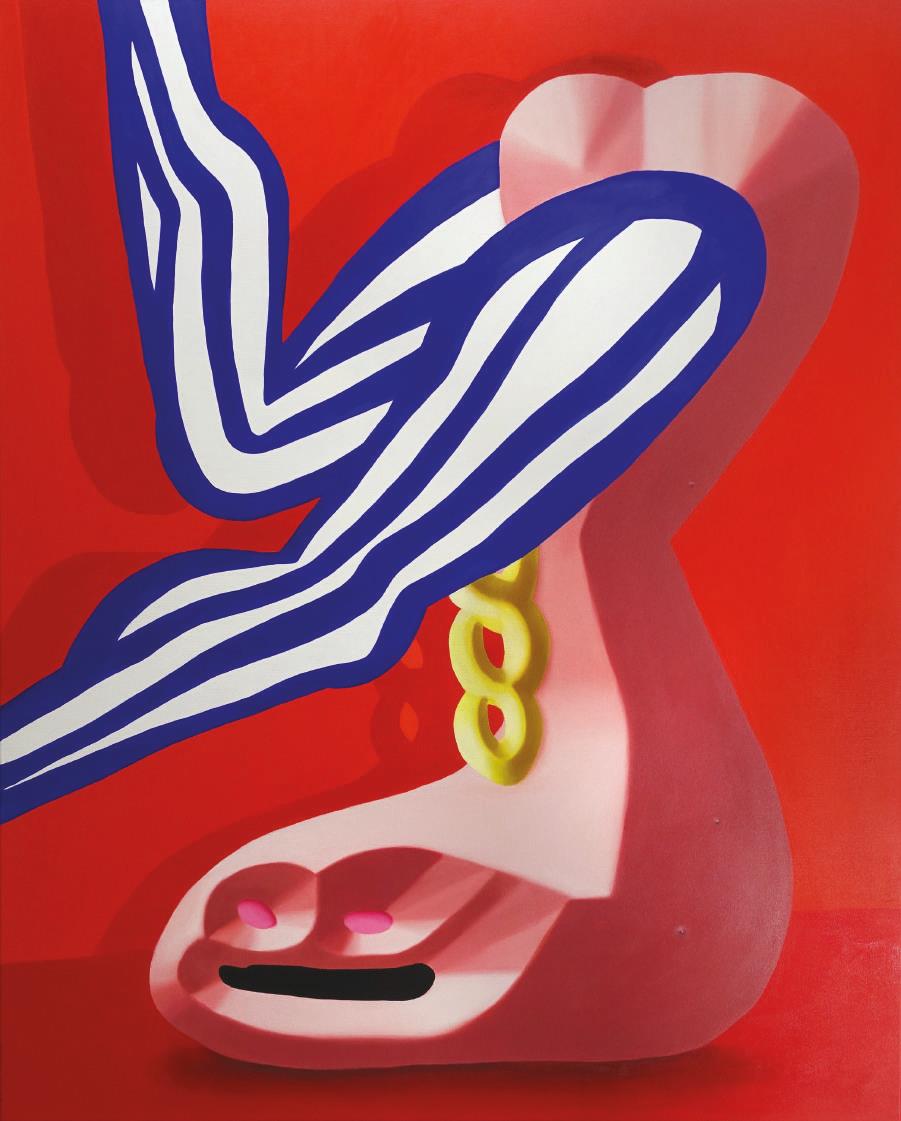 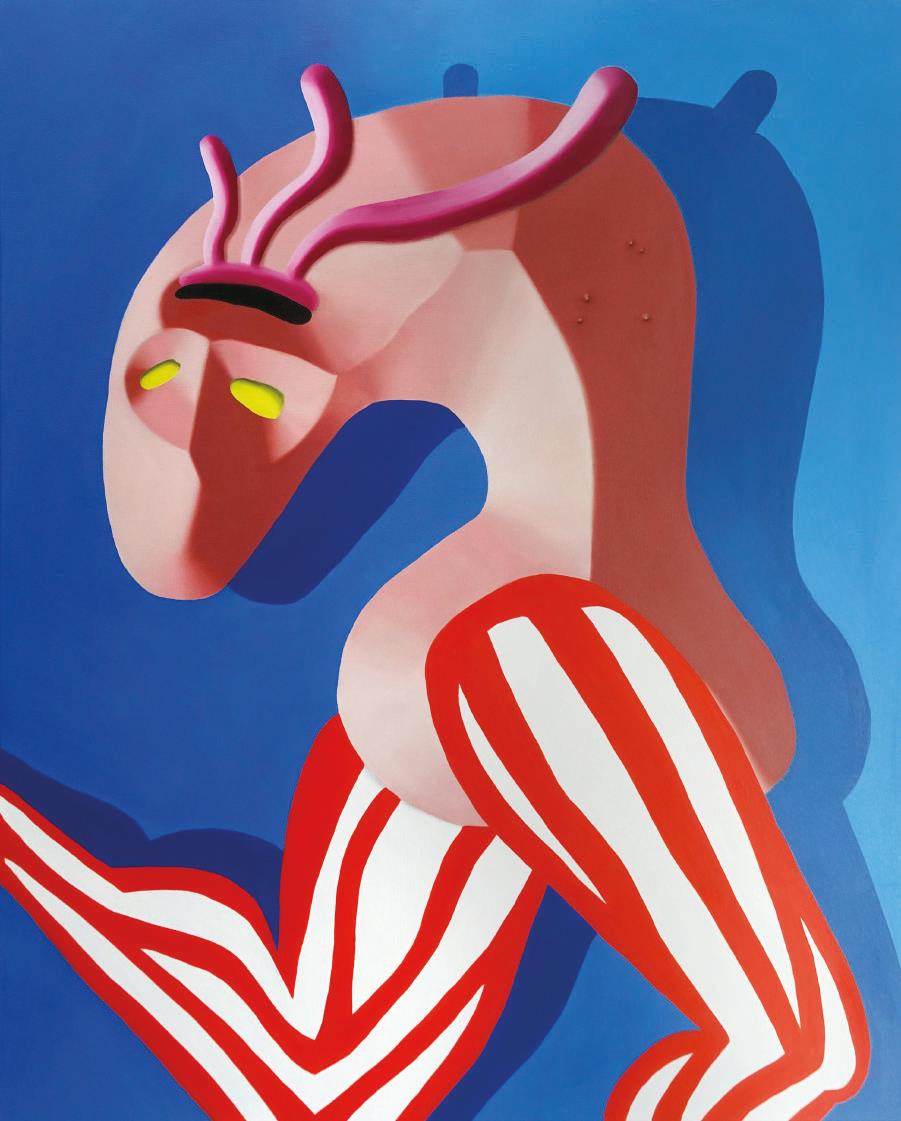 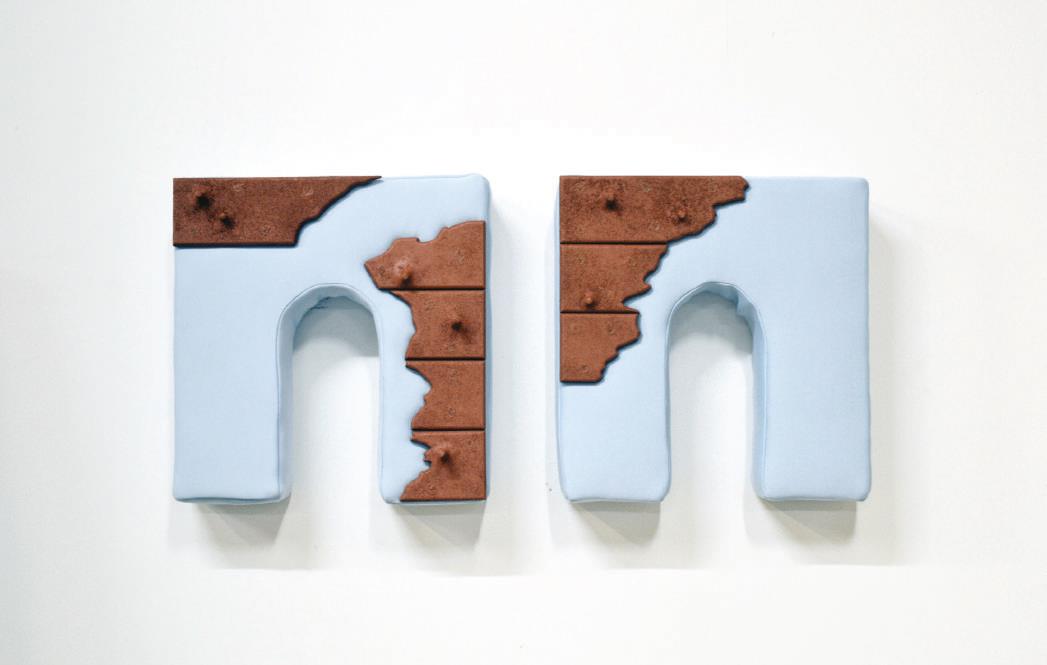 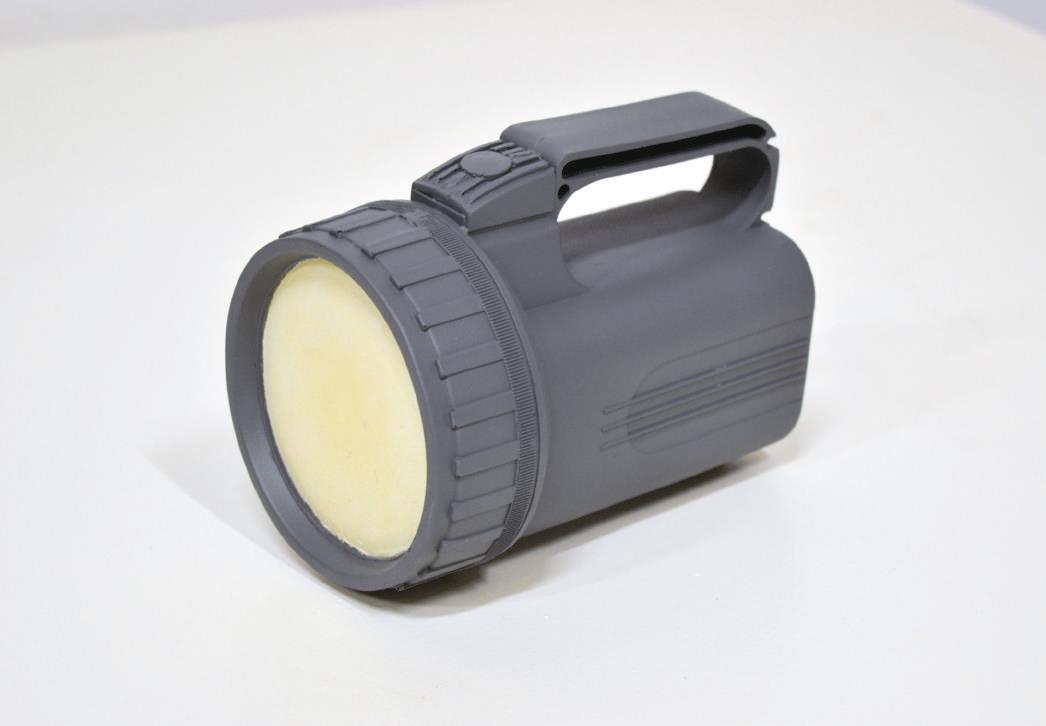 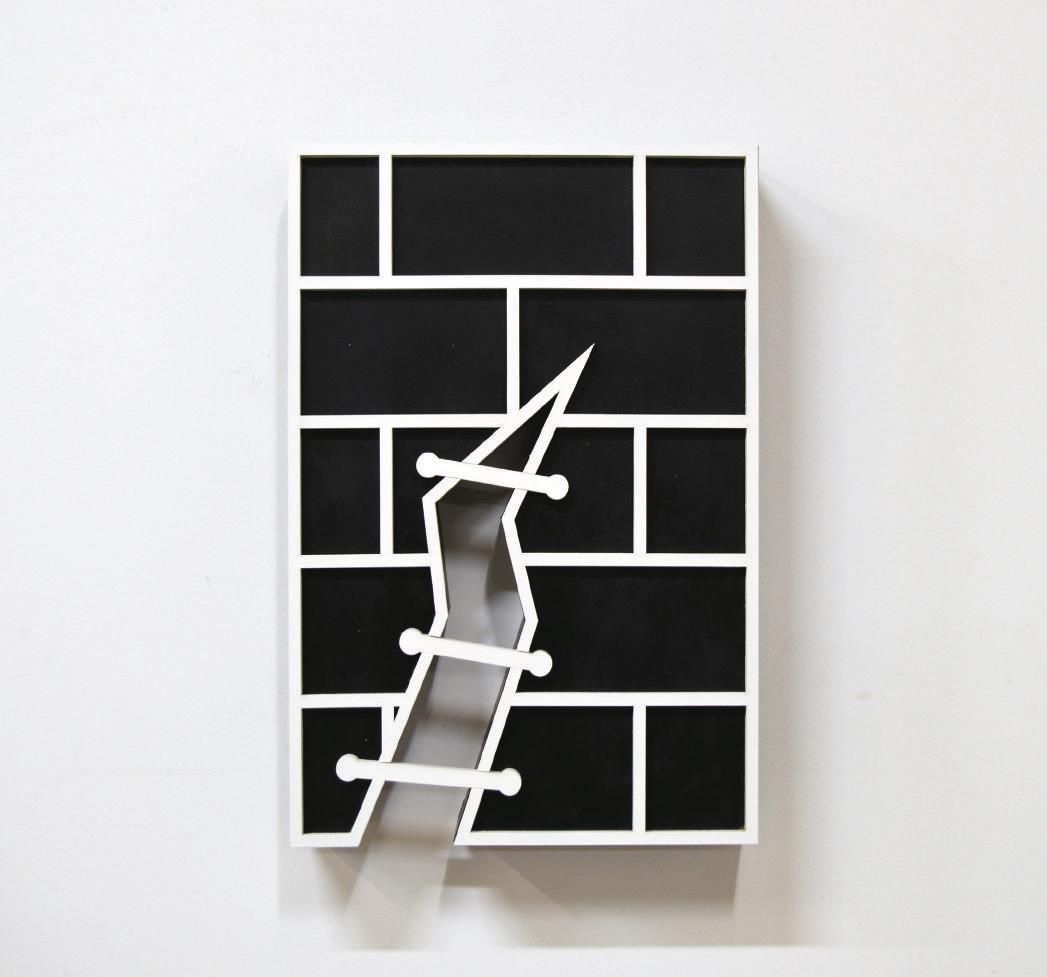 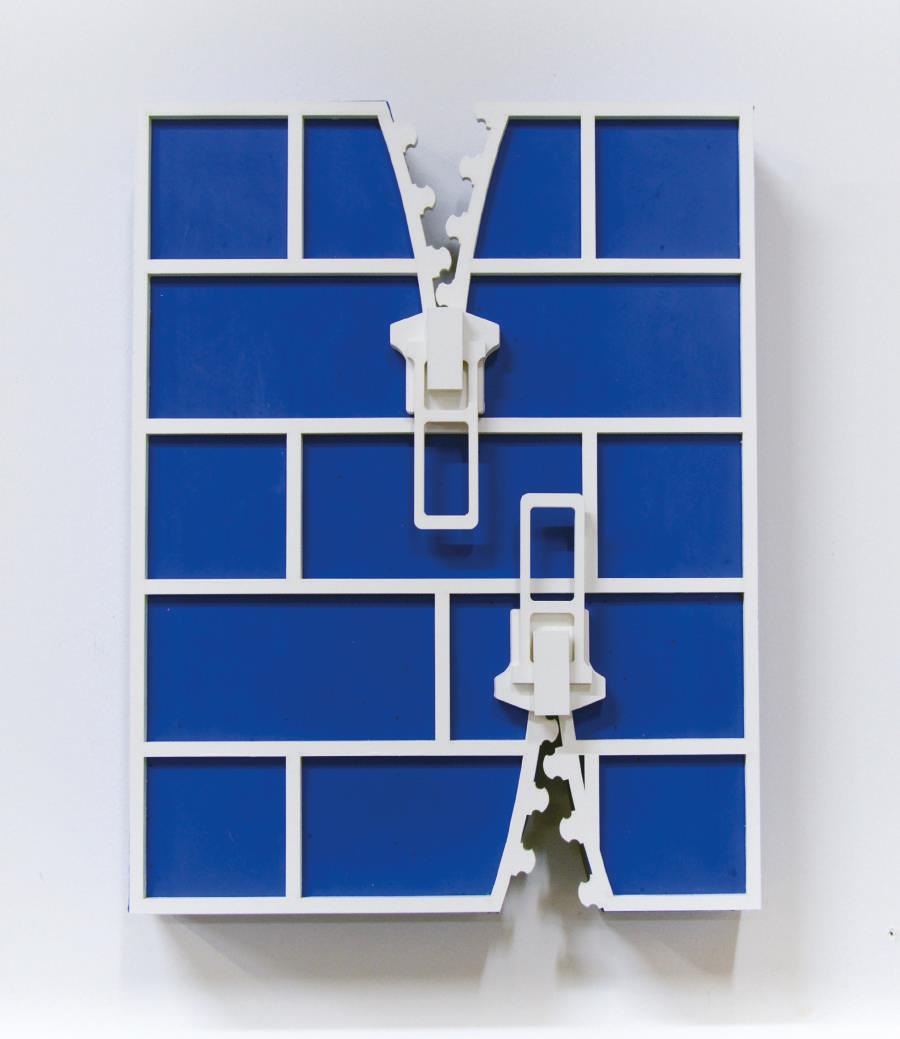 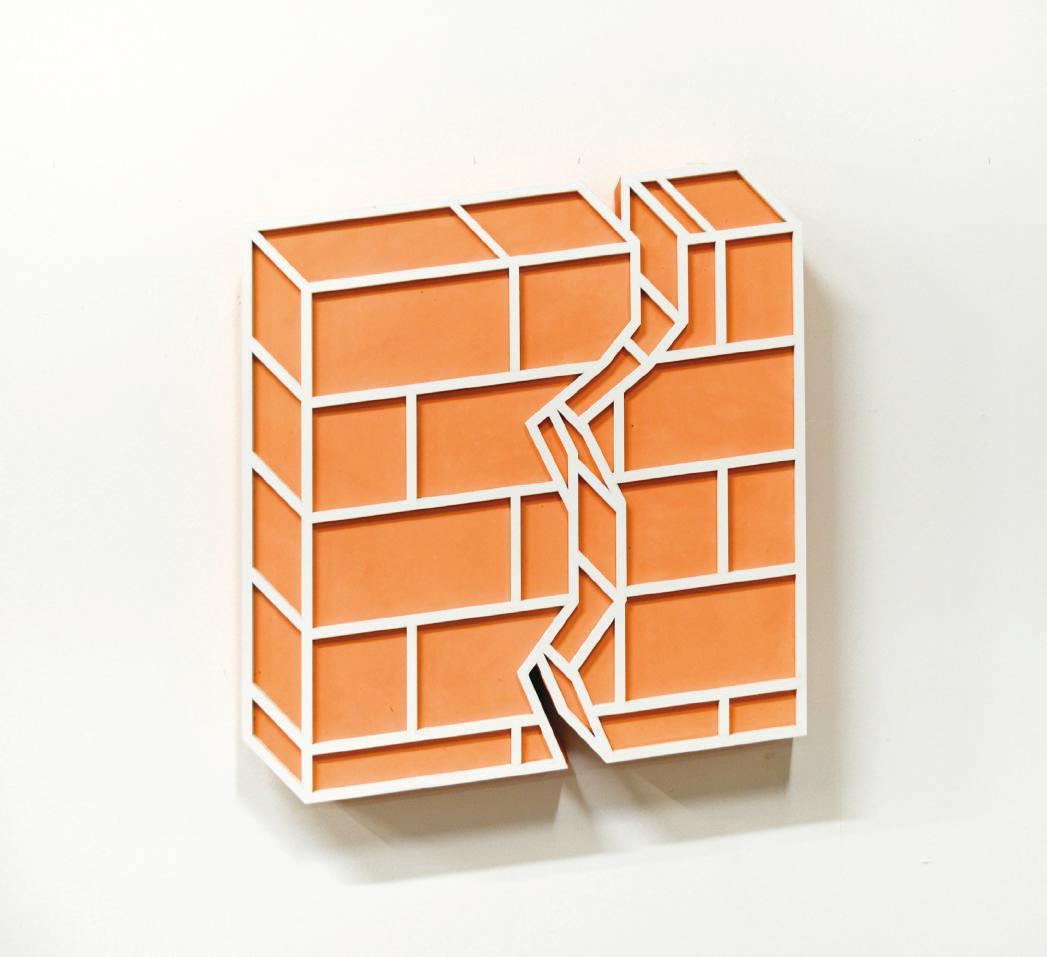 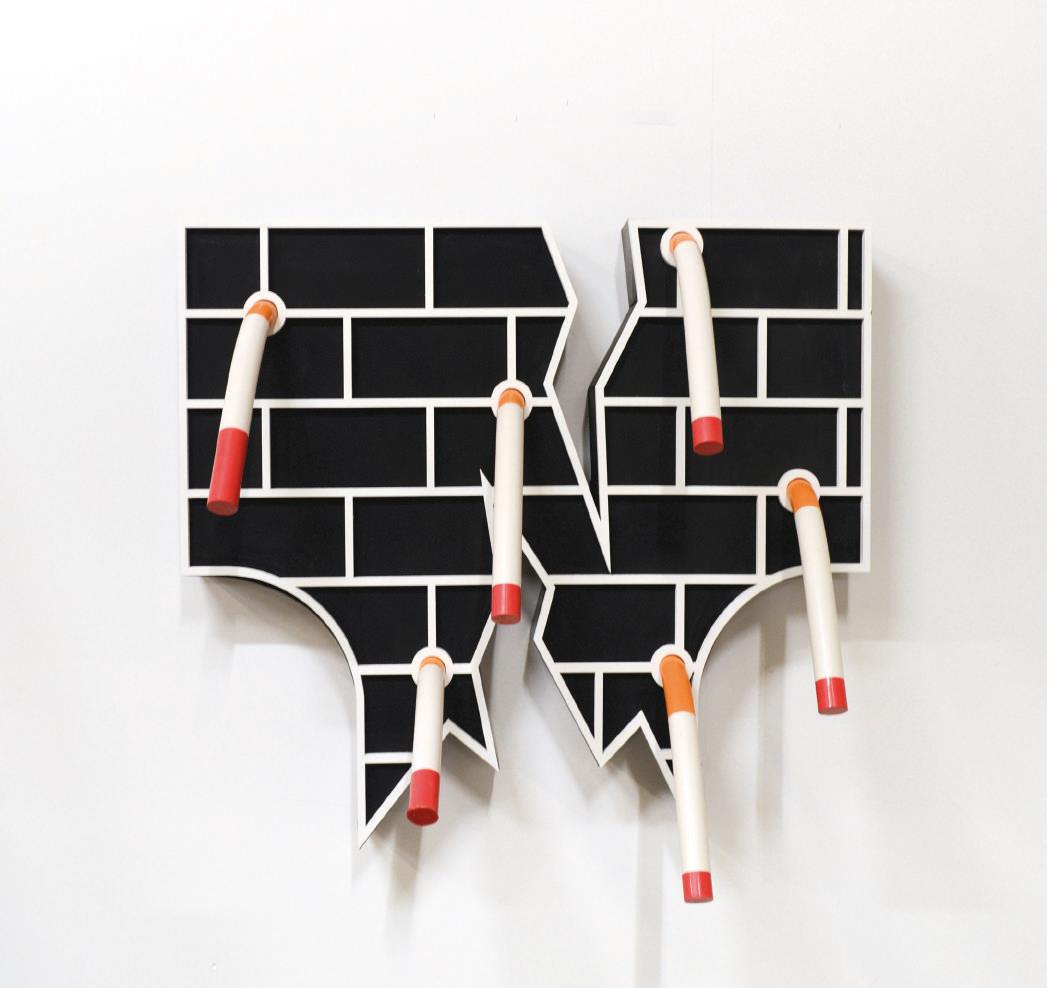 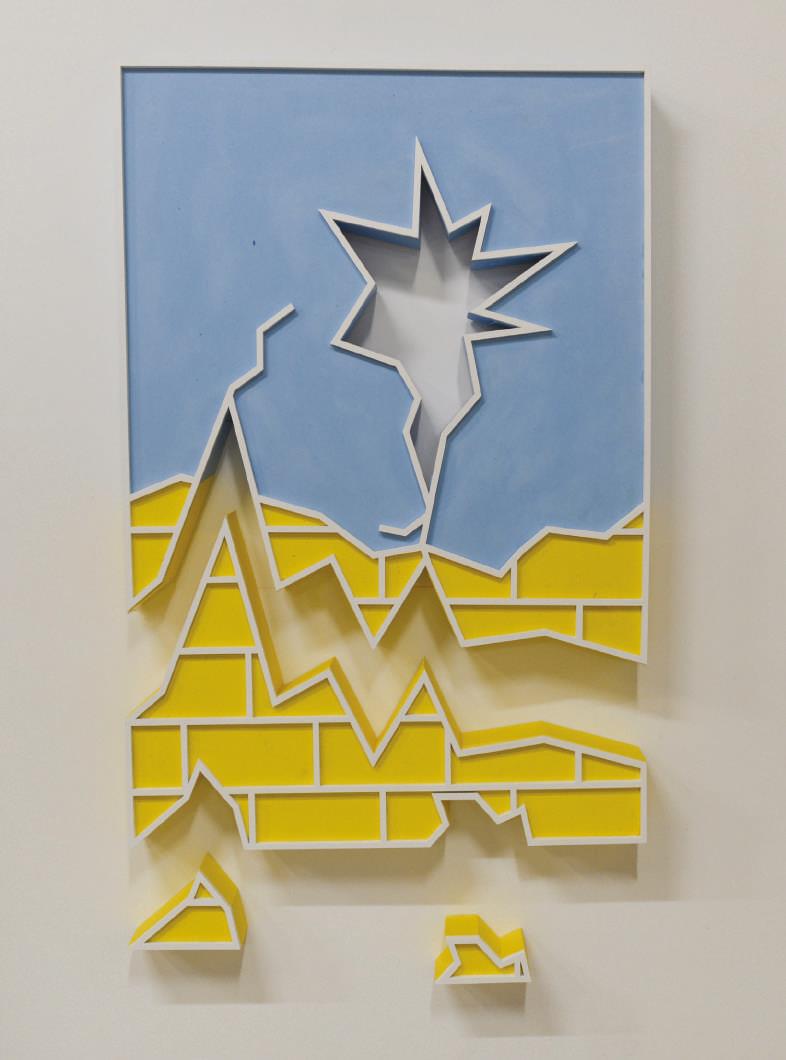 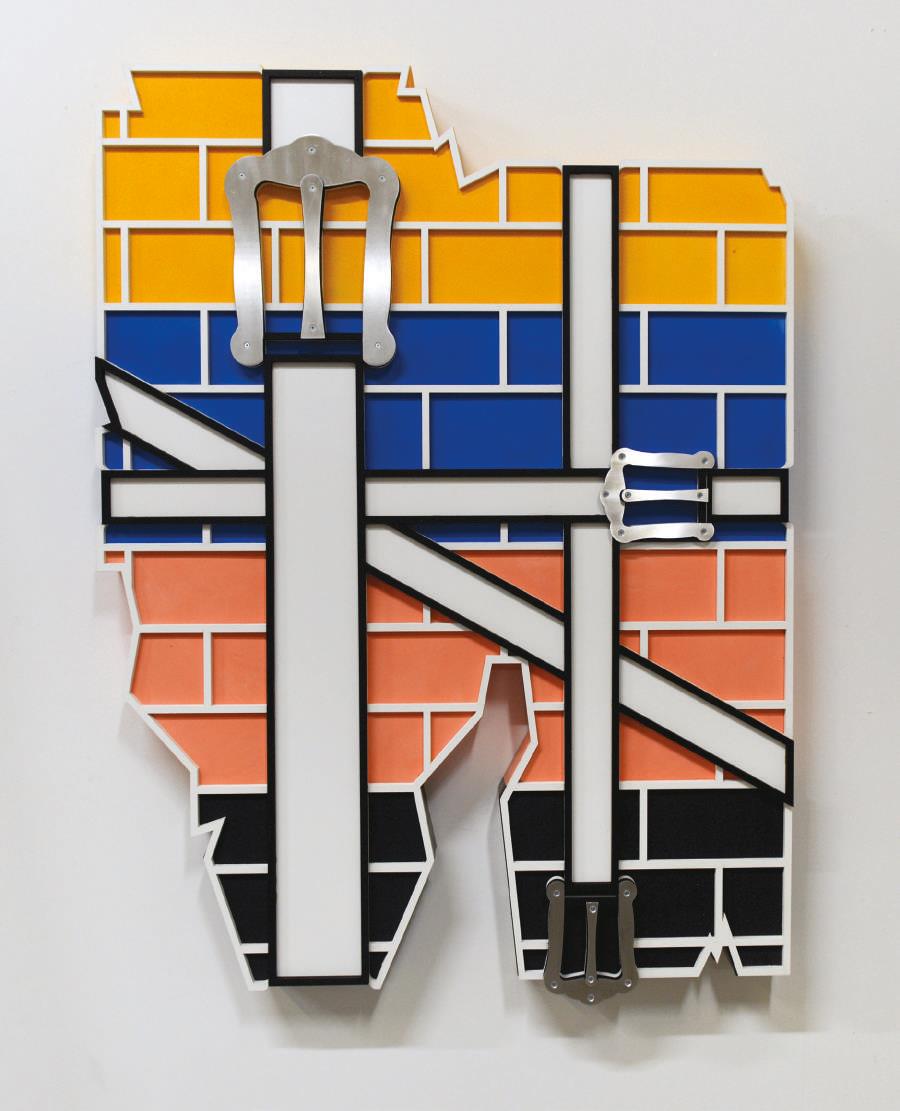 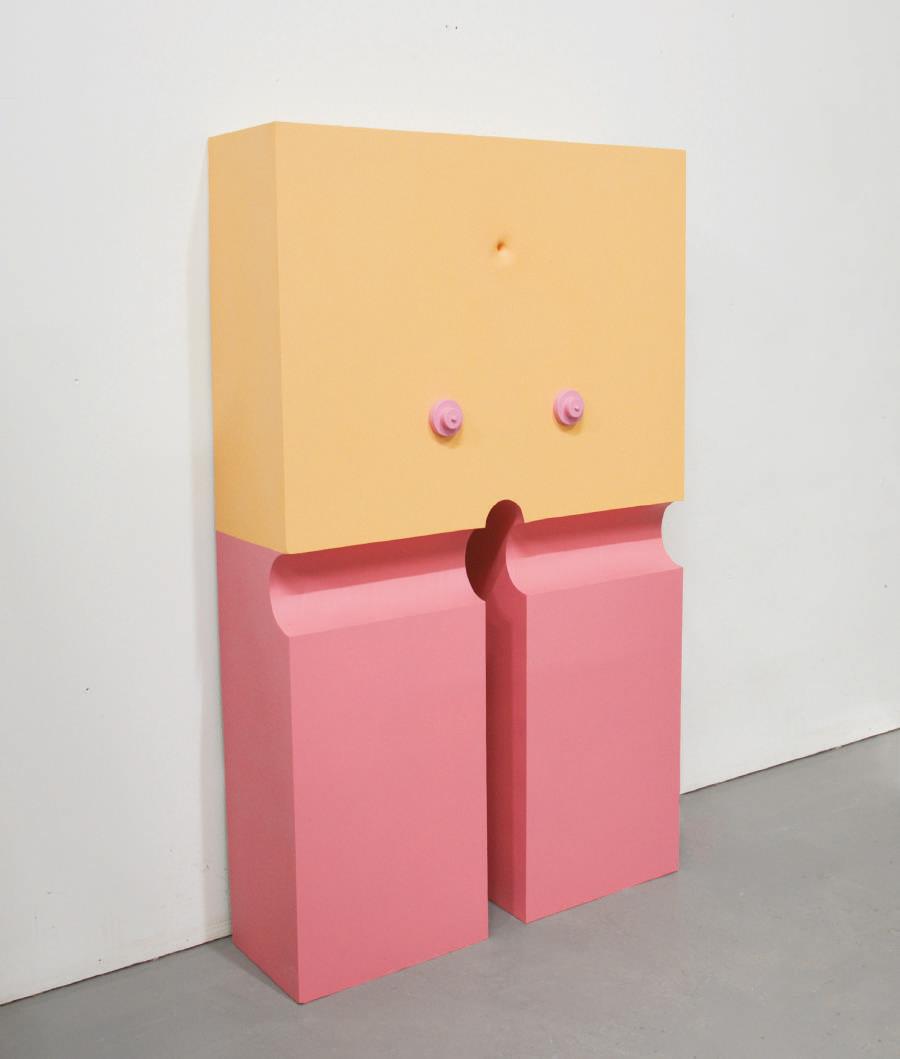 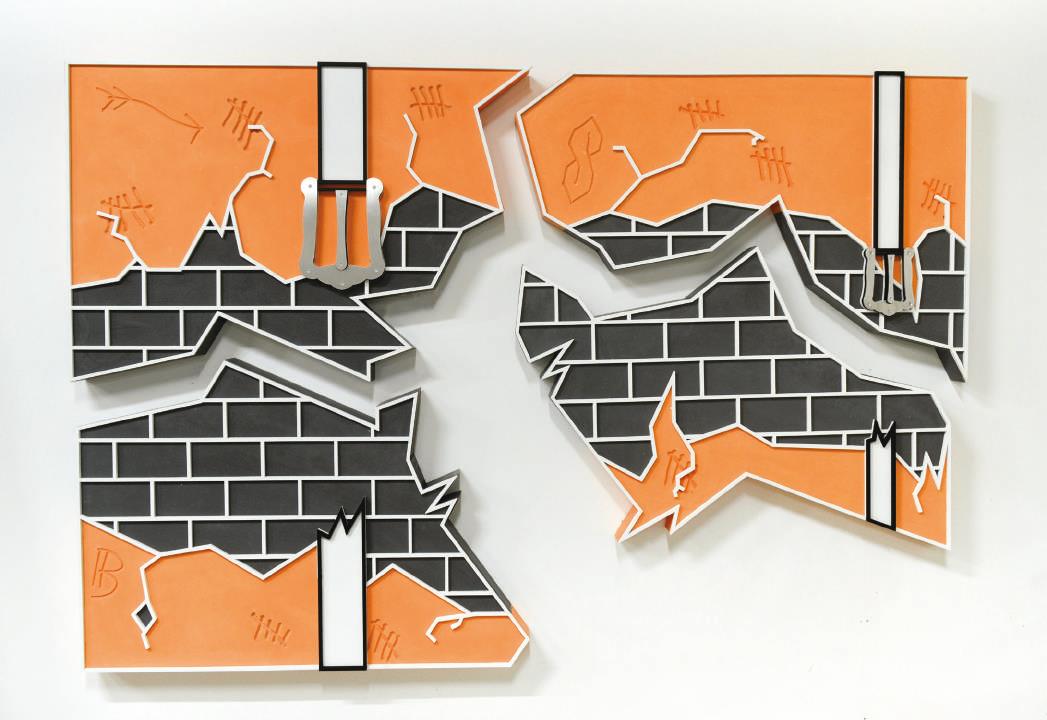 INFO
Cathrin Hoffmann (b. 1984) is a painter living in Hamburg, Germany. In her sensually physical Existentialism, she creates a digital concept of the obsessive, the abyssal, the morbid, but deeply human with a sense of hope and humor. The analog immortalization as an oil painting forces the digital world to leave its context of scrolling. She is the recipient of residencies at PLOP Residency and forthcoming Palazzo Monti Residency. Recent exhibitions include shows at The Hole (NY), Marian Cramer Projects (NL), Setareh Gallery (Düsseldorf), The Garage Amsterdam (NL), Juxtapoz in Black and White (Art Basel Miami), Art Rotterdam fair, Art Berlin fair and forthcoming Art Cologne fair. She has an upcoming Solo Show at Public Gallery (London) in September.

Liam Fallon was born in 1995  in Stoke on Trent and now lives and works in Manchester. He studied BA Fine Art and graduated from Manchester School of Art in 2017 and has gone on to exhibit both nationally and internationally including Voidoid Archive, Glasgow, Sluice Art Fair, New York and the National Assembly, Seoul. Shortly after graduating, he was awarded 2nd place at the Woon Prize and in 2018 was shortlisted for the Mark Tanner Sculpture Prize. In 2019 he was one of the first 10 recipients to be awarded the Pangaea Sculpture production award. Recent exhibitions include The Turnpike (Manchester), Plastic Murs (Valencia), Recent Activity (Birmingham) and the National Assembly (Seoul). He has an upcoming exhibition at PINK (Manchester) as part of the Pangaea sculpture production award.

In the Ashford and Simpson song, ‘Solid’, the husband-and-wife pop duo belt out their famous duet under a Central Park bridge, reunited whilst taking shelter from a torrential downpour. The title of the song, of course, refers to the idiom and mainline, ‘solid as a rock’. The couple here harmonize and serenade one another, compounding the metaphor of their joint singularity and strength. This pair sum up the cultural idea of the dyad, of the single entity that consists of two parts. In this Motown classic, the dyad is rejoiced, uplifting and aspirational. The dyad is central to a lot of sociological thinking (most especially in heteronormative climates) but inevitably smuggles within it a dichotomy; it has to have two distinct parts to be whole. Perhaps, then, it is possible to be ‘solid as a rock’, whilst also being ‘stuck between a rock and a hard place’.

Somewhere in between is where Liam Fallon and Cathrin Hoffman have their duet.

The theme of Abstraction is the thread that pulls together the works of Hoffmann and Fallon. At first, the anthropomorphic figures that dominate Hoffmann's canvases have a sense of figuration; after further rumination, lines blur and figures unfold into something entirely abstract. Indeed, this is much akin to Fallon's interest in queer abstraction and his work, and how usually overlooked objects are reappropriated and reinterpreted to tell different stories.

The to and fro between binary positions comes part and parcel with the dyad. Push and pull, give and take, cause and effect. Moreover, a conversational tete-a-tete might also be a rivalry head-to-head. It’s what happens in between that counts. Both storytellers, Fallon and Hoffmann have created quite the drama: Fallon's walls shatter, seductively unzip and belt themselves together again. In the next act, Hoffmann's desperate characters dance with reckless abandon, tongues wagging and flailing in the air or Vogueing with razor-sharp acrylic-tip fingernails.

There is a unity between the two artists that is explicit in Fallon's 'Handstand'. Fallon builds upon his bombastic pop aesthetic to try his hand at figuration. Ever peculiar, the abstracted Lego-style form is decoded by candy pink buildable nipples and the tell-tale inversion of the belly-button; the only notable intrusion on an otherwise impeccably smooth rendering with Lego-like high gloss finish. In contrast, Hoffmann has a fascination with the depiction of skin and the surface. Skin is porous and permeable, yet in her work, it is rendered with graphic clarity with some human interventions, speckled with pimples and warts, perfectly imperfect. 'Handstand' instills the playful and fanciful behavior and humour of Hoffmanns strange figures; upside down, the body is distilled into minimalistic yet imposing blocky column-like shapes in Fisher Price pastels pinched from Hoffmann's signature palette.

In the process of putting together their duo show at DUVE Berlin, Fallon and Hoffmann have been back and forth to put together new bodies of work that test, yet are sympathetic to one another. In correspondence, Fallon himself observed that ‘some elements have to be pulled together and held pretty tightly, worked on even, and then sometimes things naturally fall together’.

Working from across painting and sculpture the two artists meet somewhere between figuration and abstraction. Fallon’s anthropomorphic architectural debris and Hoffmann’s geological humanoid shards conjure our built environment, our natural world, and our sensitive bodies. In the swing between figure and ground, body and object, ambiguity abounds. Common to both artists, however, is the importance of objects. They grab us every now and then with something stable to hold on to; a belt or a balloon, for instance. But even the stability of these objects is characterized by in-between states, holding together under tension, push and pull are in temporary stasis.

Fallon and Hoffmann’s temporary meeting at DUVE Berlin demonstrates and interrogates ‘solid’ states. We once thought the atom was finite but with nuclear fission, we explored the space within. There was a lot more than we bargained for somewhere in between.
Press Text