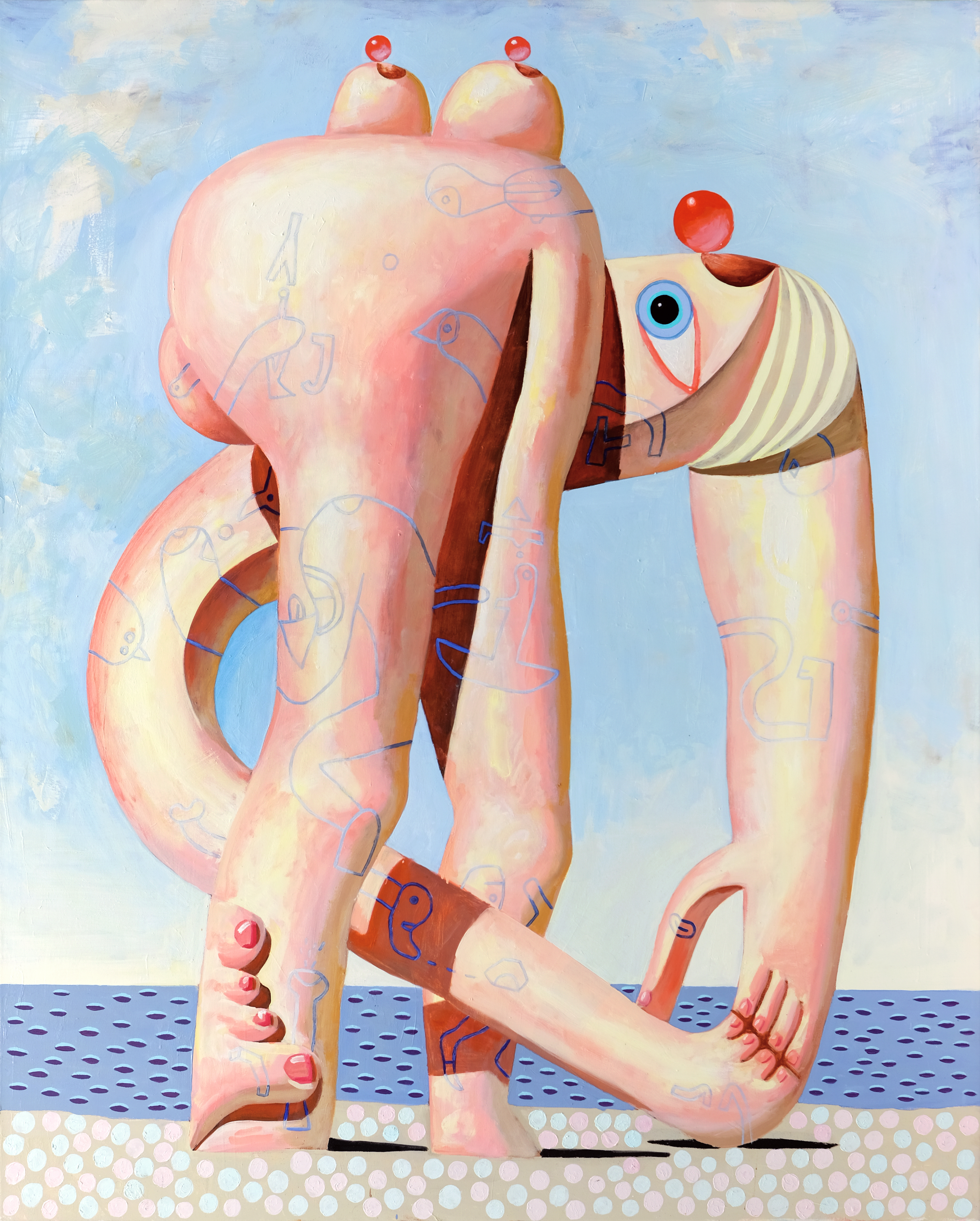 INFO
Leo Park is based in Stockholm, Sweden. After receiving his MFA in 2019 from Konstfack University of Arts, Craft & Design, Stockholm, he started organizing and exhibiting his works in group shows in Stockholm. After his sell out debut solo show in 2021 at Gallery Steinsland Berliner, he has also started exhibiting outside of Sweden, under others in group shows at Ruttkowski :68, Cologne, GR Gallery, NYC,  or at VSOP Projects NY. His first US solo presentation in New York just closed at Gr Gallery.  In April he will participate in the Market art Fair in Stockholm and has an upcoming group show at VINS Gallery in Taipei. His show at Duve Berlin is his first solo in Germany.

The artist is showing a current series of works with symbolic beach motifs in oil. Bodies with exaggerated volume detached from perfection, reason and regimentation. A strongly geometric conception of nature as well as the representations within it pervades the works. Park reduces the supposed beach visitors to the elements that are important to him.

Mostly consistent proportions give the impression that the creatures lie between figure and sculpture. The sculptures in the picture have a life of their own - a vitality that seems to emerge through pressure from within. They play with their own limits, follow their own inner logic.Yet the viewer is predominantly confronted with disturbing elements.

Stylistically, Park‘s works are difficult to classify. Representational features range from antiquity to the late 20th century. They seem equally removed from the present. Many body shapes, for example, are reminiscent of the so-called Reclining Figures by the sculptor Henry Moore. Stone and bronze are transformed into delicate pink hulls. Abstraction and figuration go hand in hand.

Pablo Picasso‘s influences can also be clearly detected in Park‘s works. In particular, the painting „Deux femmes courant sur la plage (La course)“ from 1922 seems to have a strong meaning in terms of subject as well as its representation. Various forms of abstraction are attempted to be conveyed in realistic language.
In some cases, a paradoxical play of silence and typical Post-Impressionist themes emerges.


The ideal of the body - as prevalent in antiquity as well as rediscovered in the Renaissance - is also taken up. Park‘s works confidently open up to these influences instead of closing themselves off from them. As if they were obsessed with shape and form. Less of anything in particular than of everything and everyone.

Light pencil drawings represent constantly recurring tattoos. They are a mixture of figures and glyphs; their symbolism is ambiguous - their impulsive use, a way of spying on oneself. They describe signs, insects, fragments of diagrams or maps, rivers and trade routes. They move in a non-hierarchical space - without beginning or end.

Hovering over everything is the artist‘s fascination with the recurrence of a certain situation or creative composition over the centuries. Park compares collective image production as well as its reception to shared dreams.

The exhibition is the continuation of a universe that Leo Park has been dealing with for several years - beginning with the theme of the bathers. It is striking that in the current works nature - especially in the form of landscape - is more present. It seems as if here art must also allow nature the sublime of duration.
Press Text