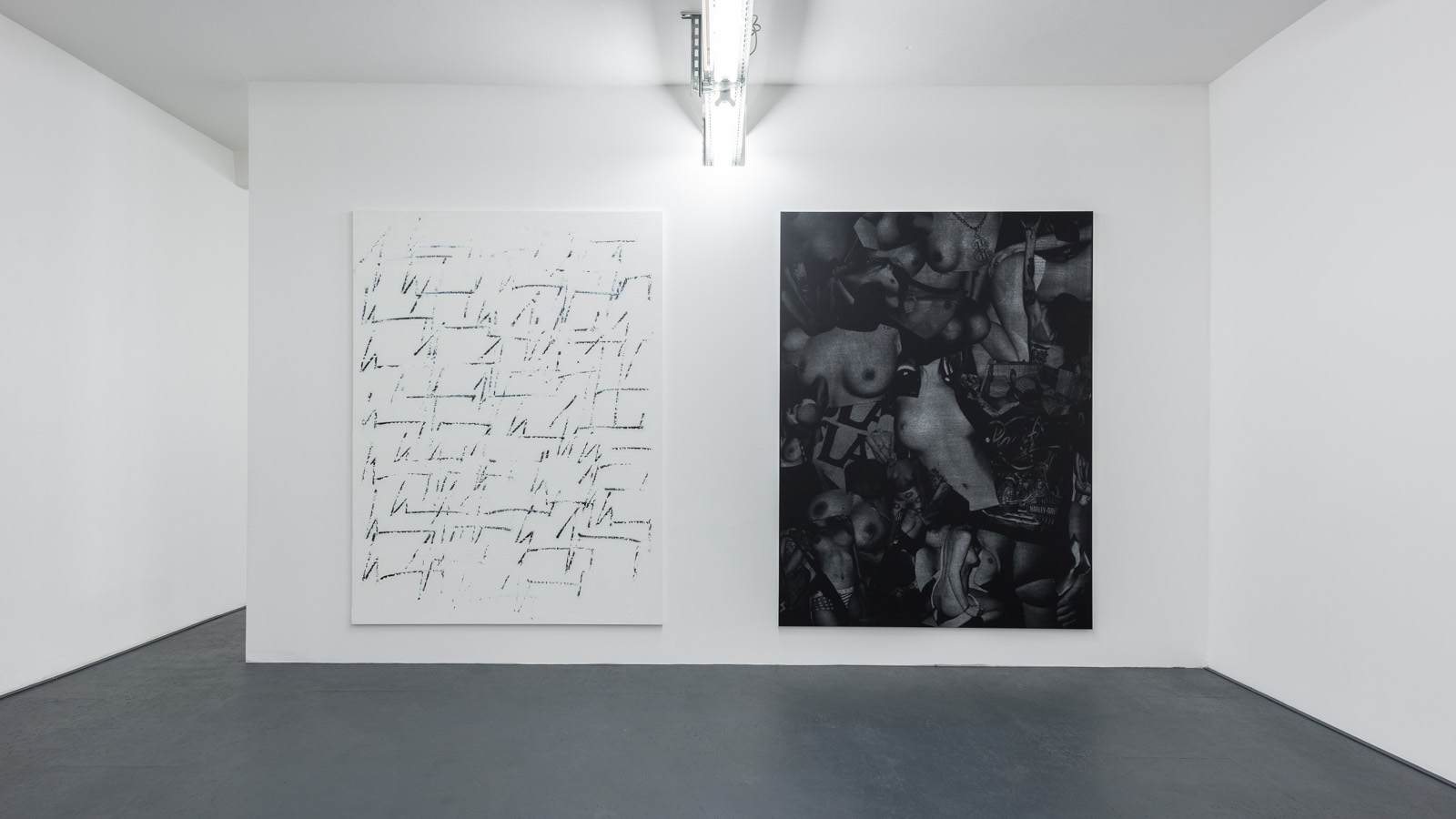 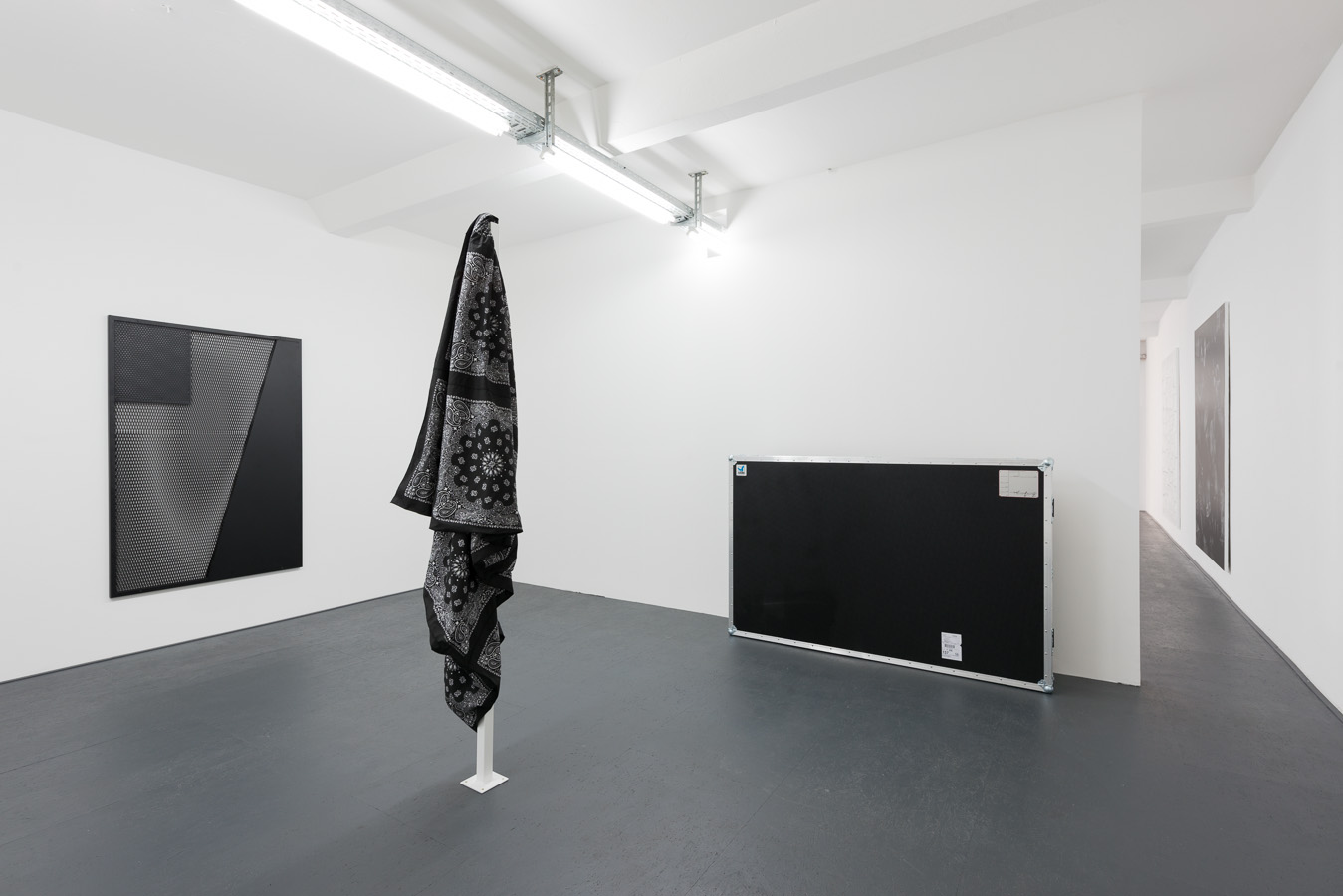 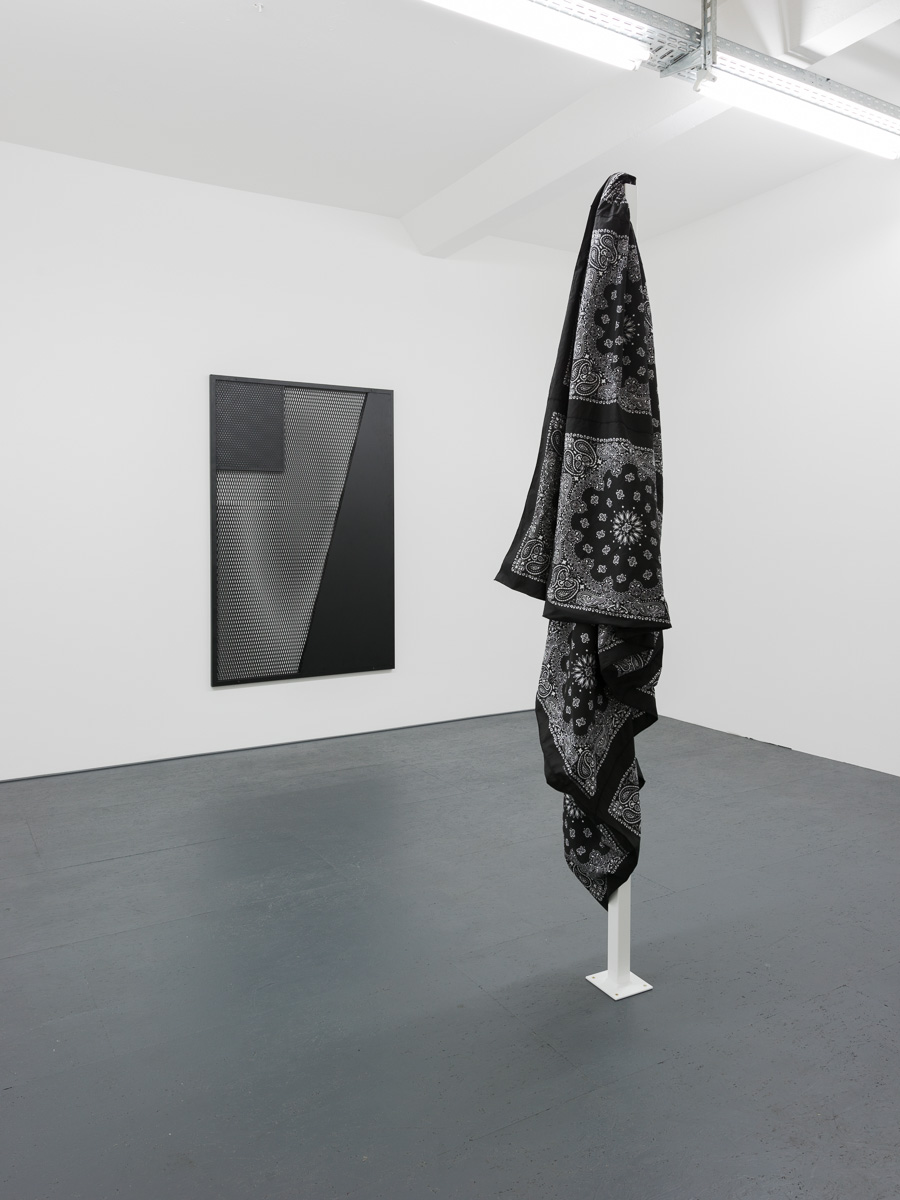 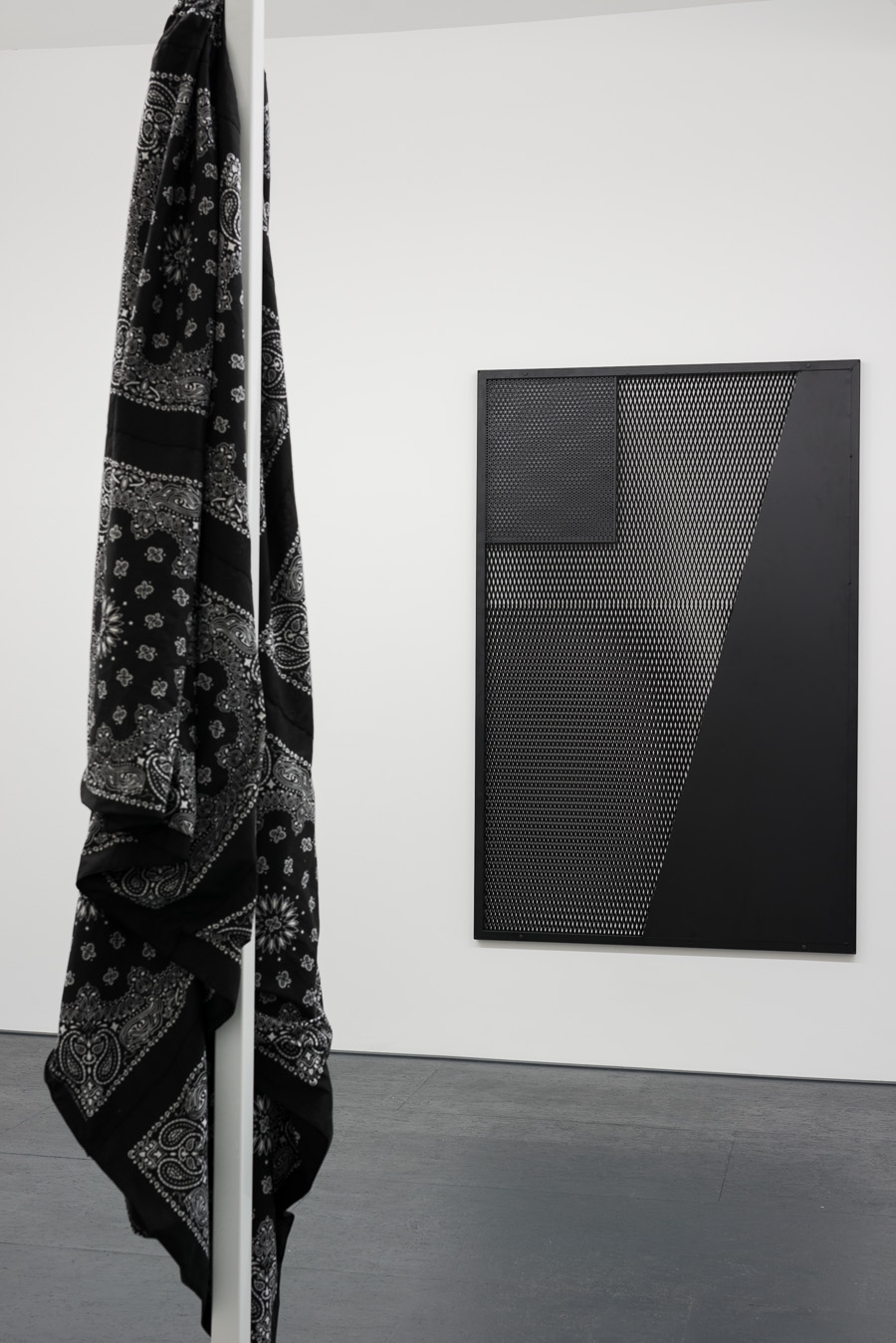 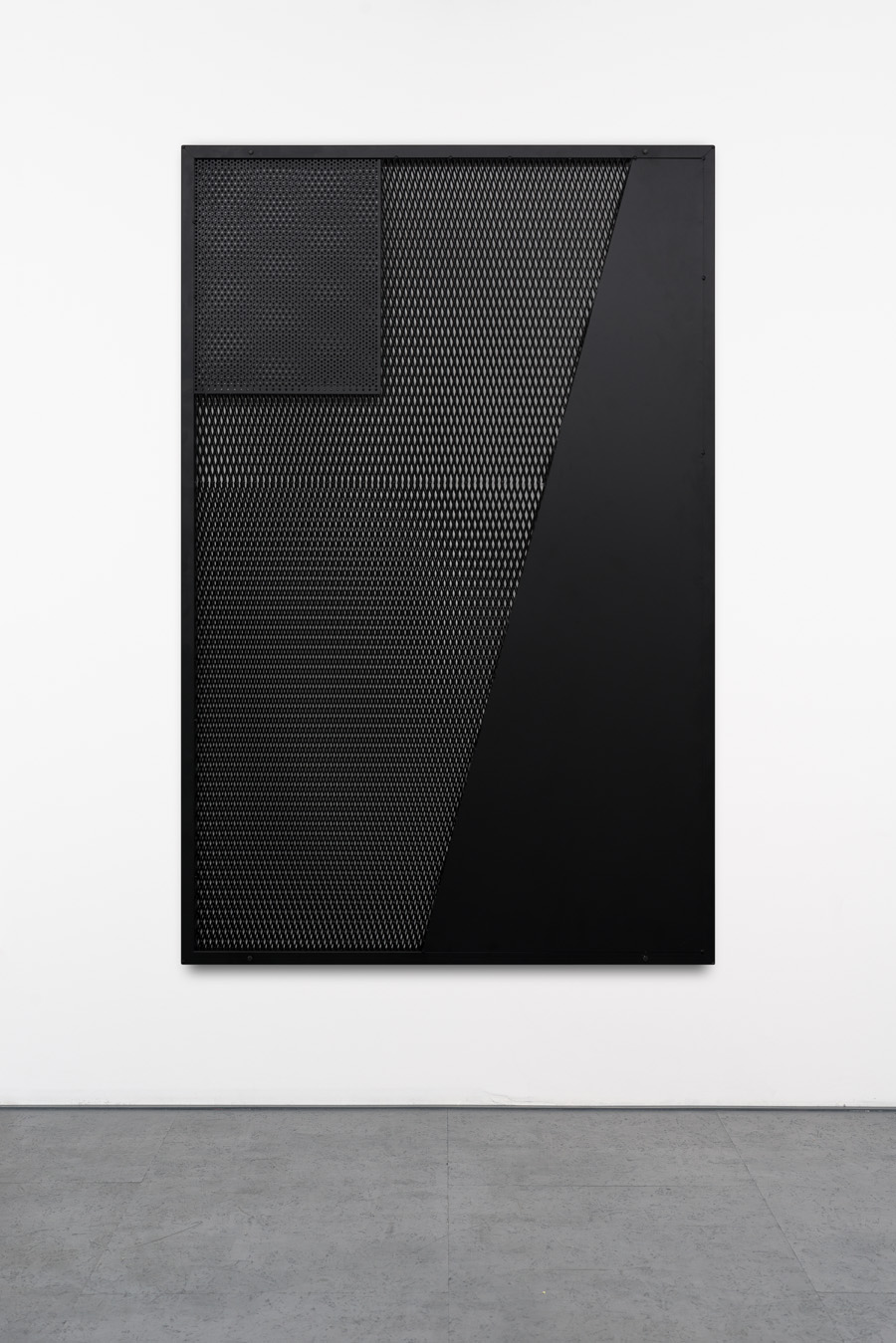 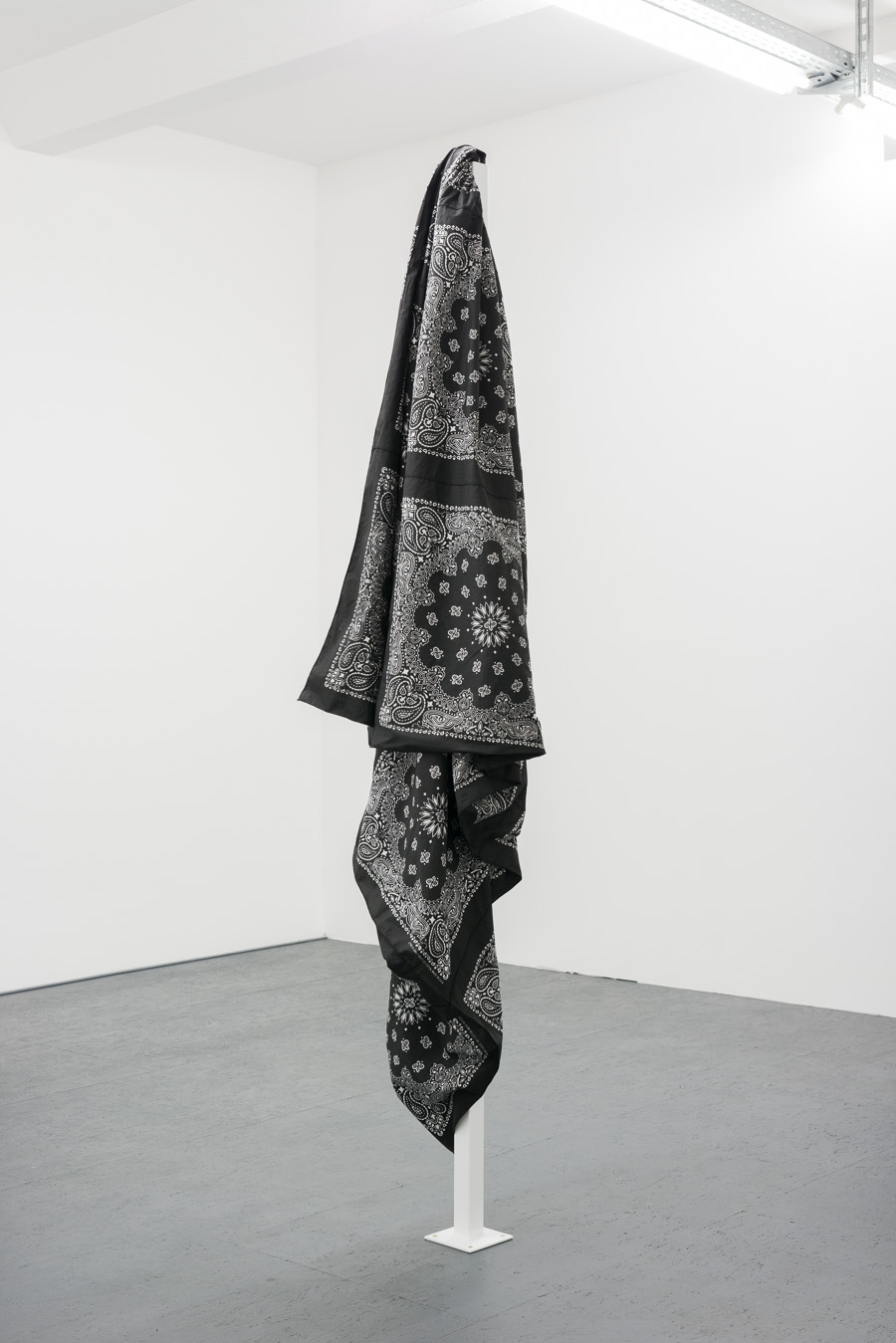 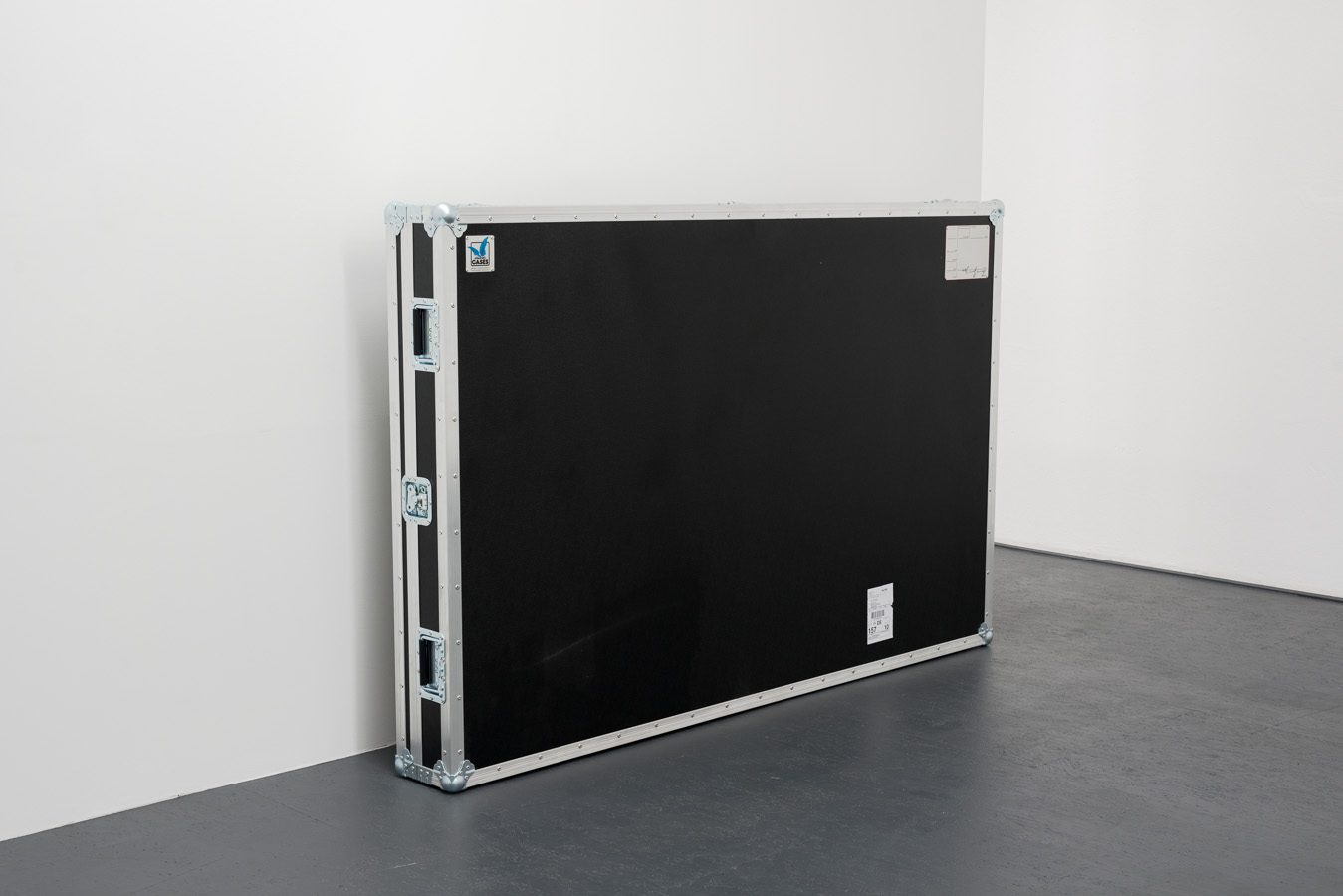 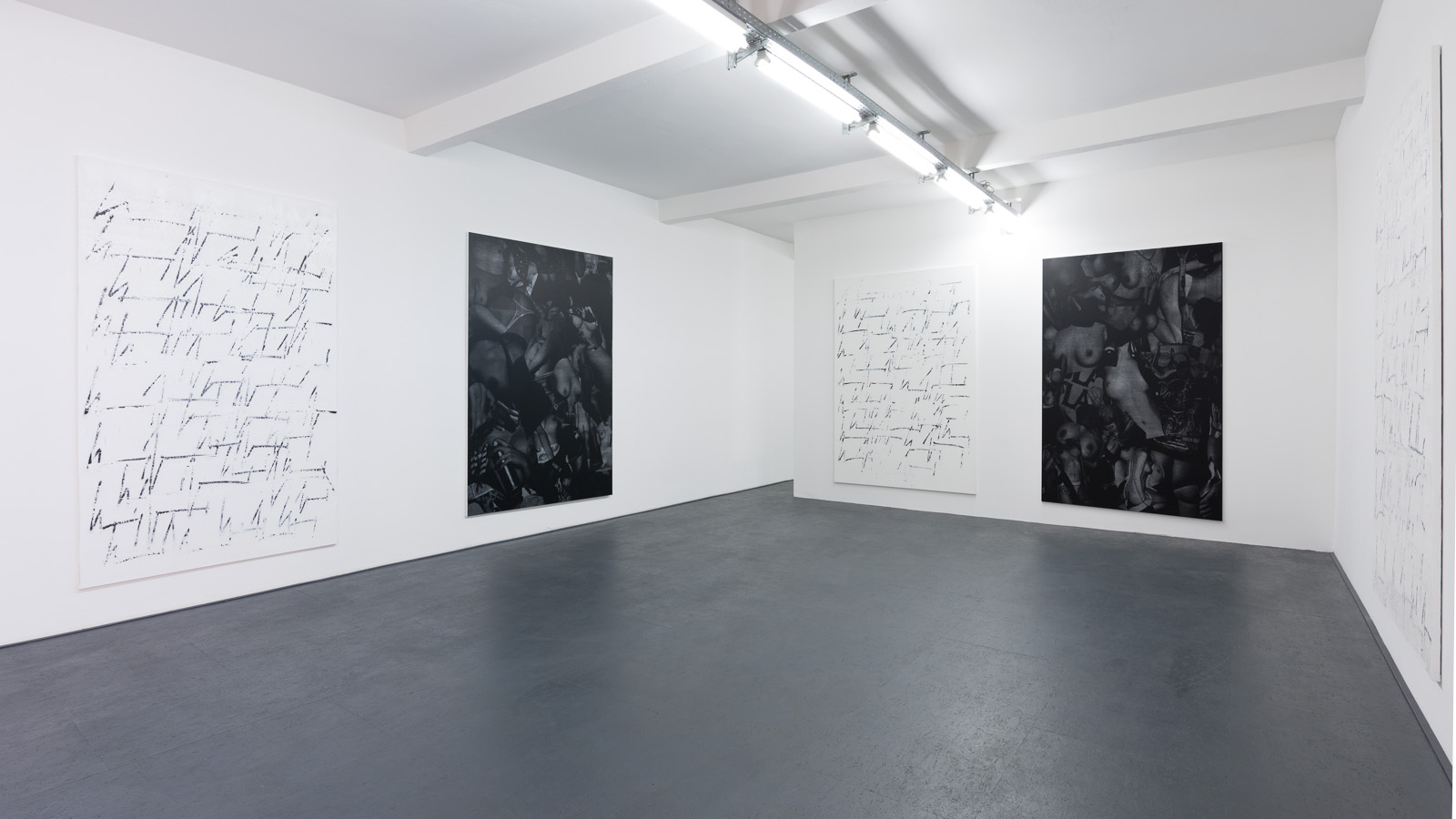 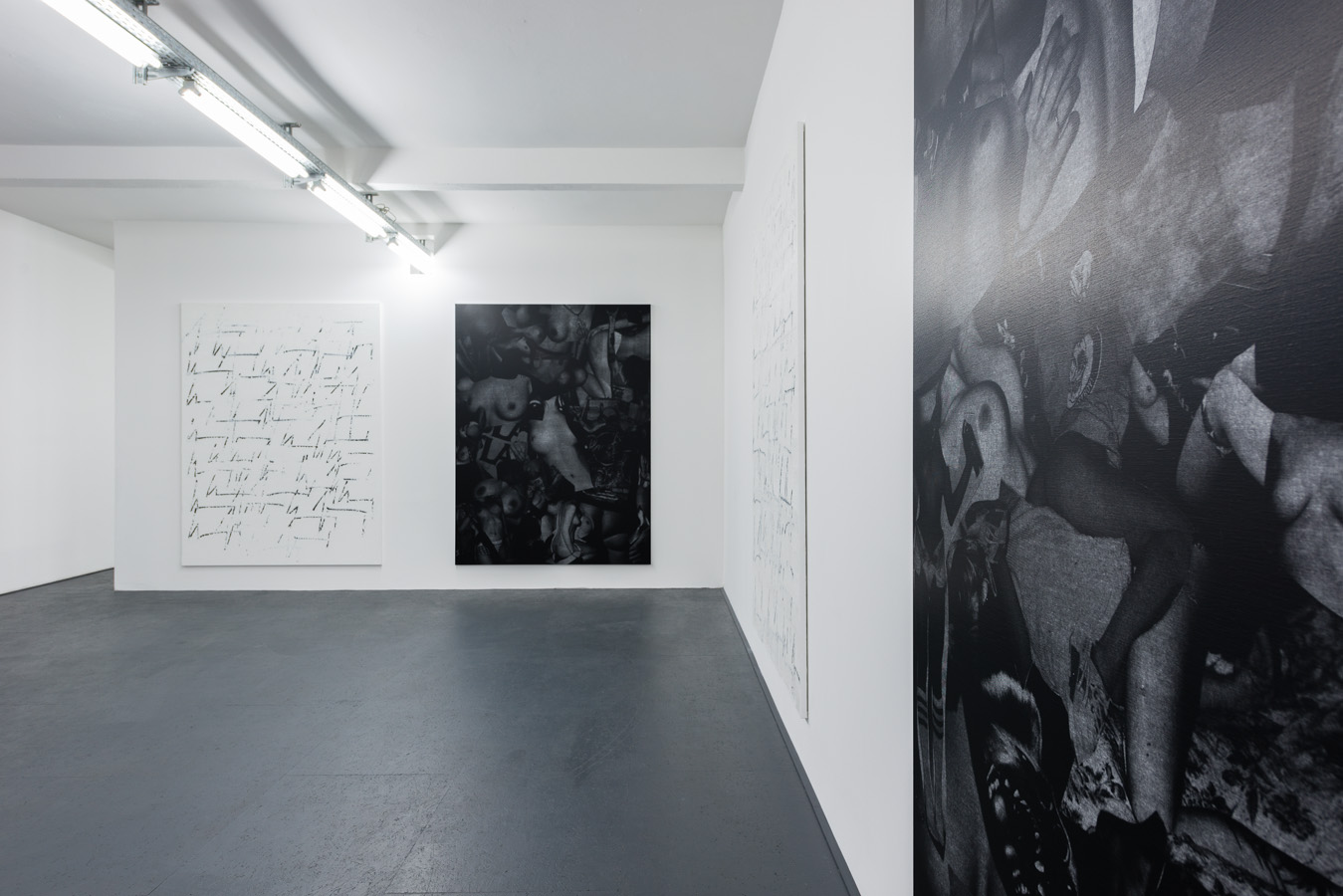 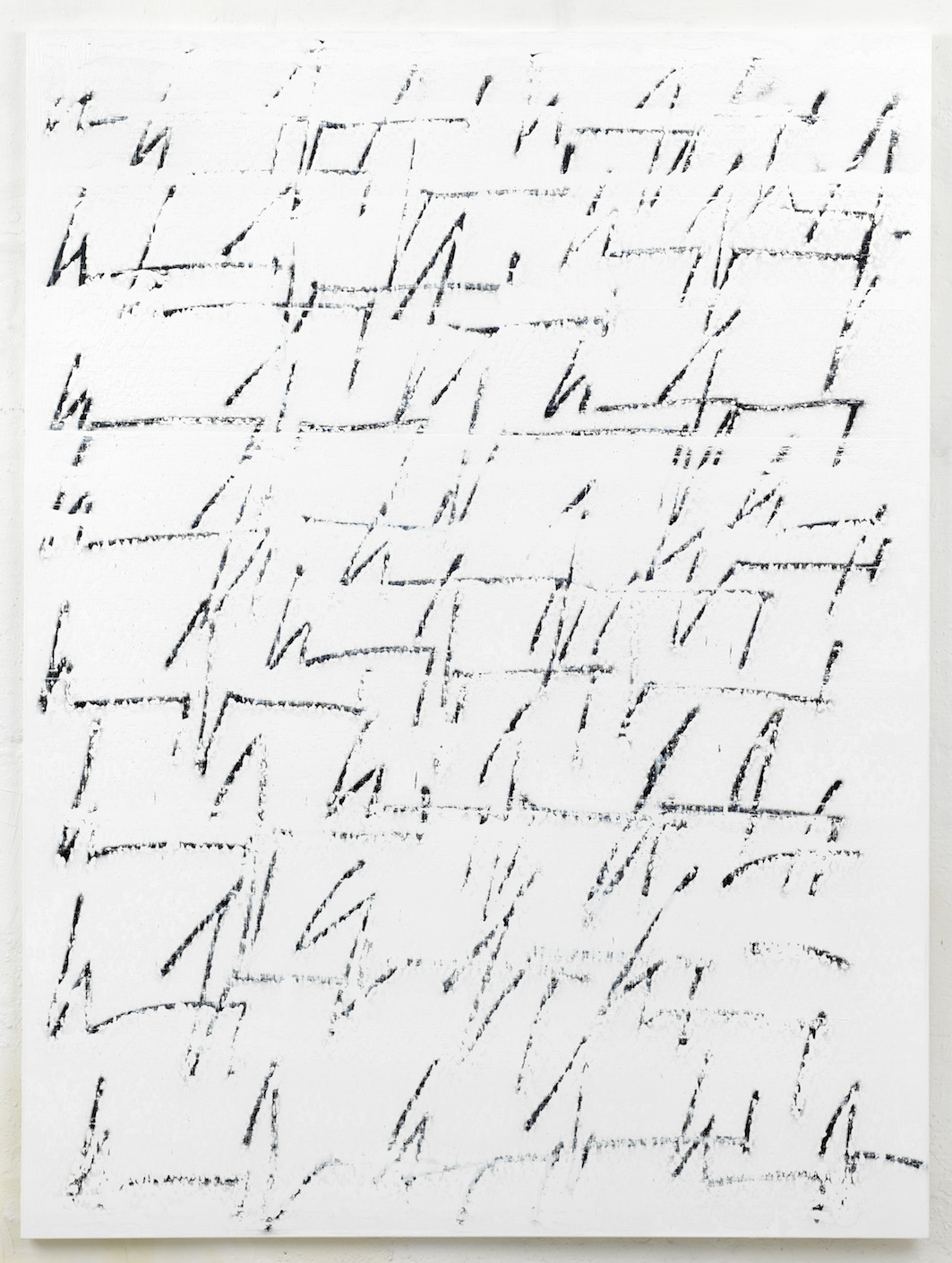 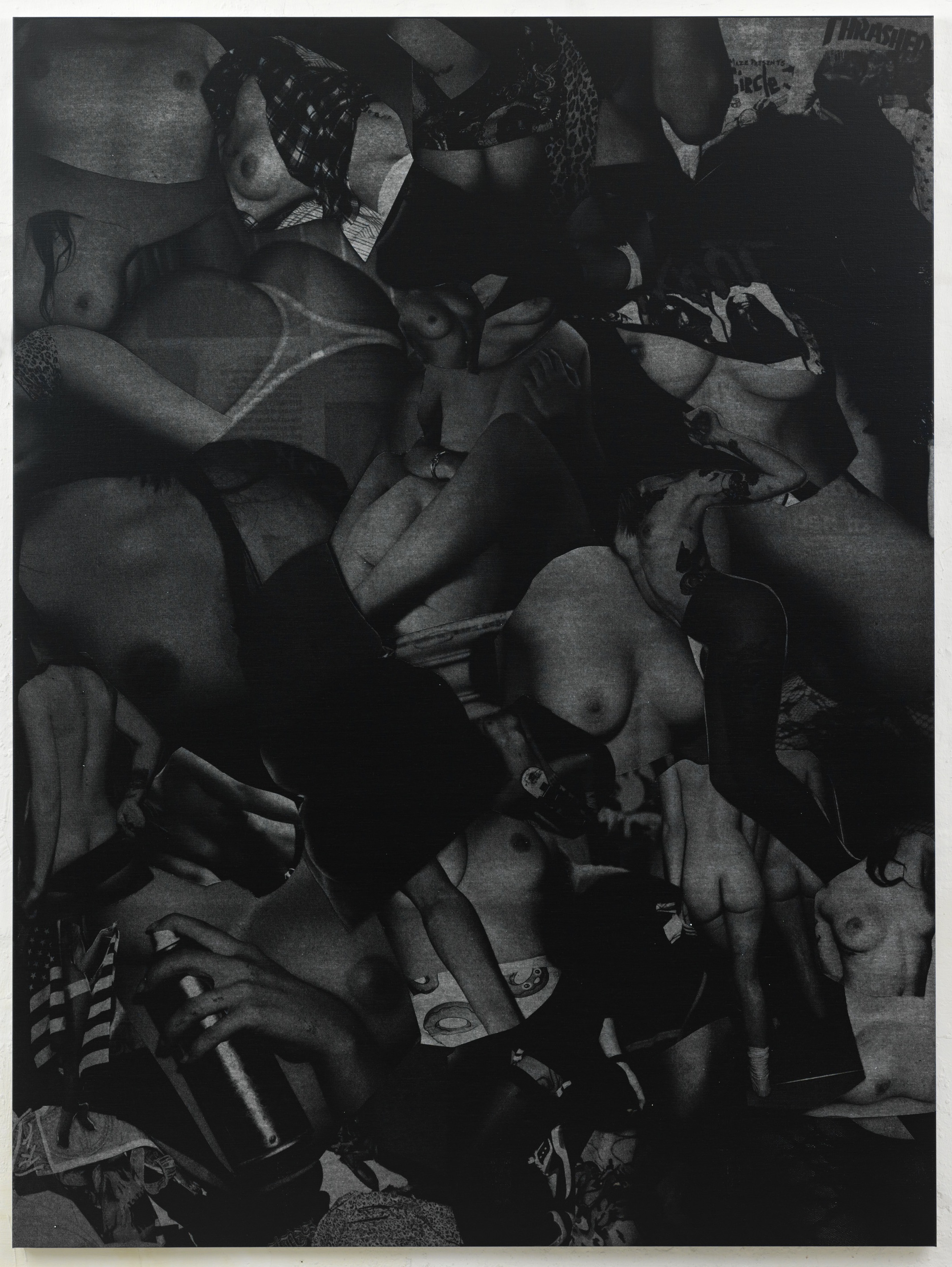 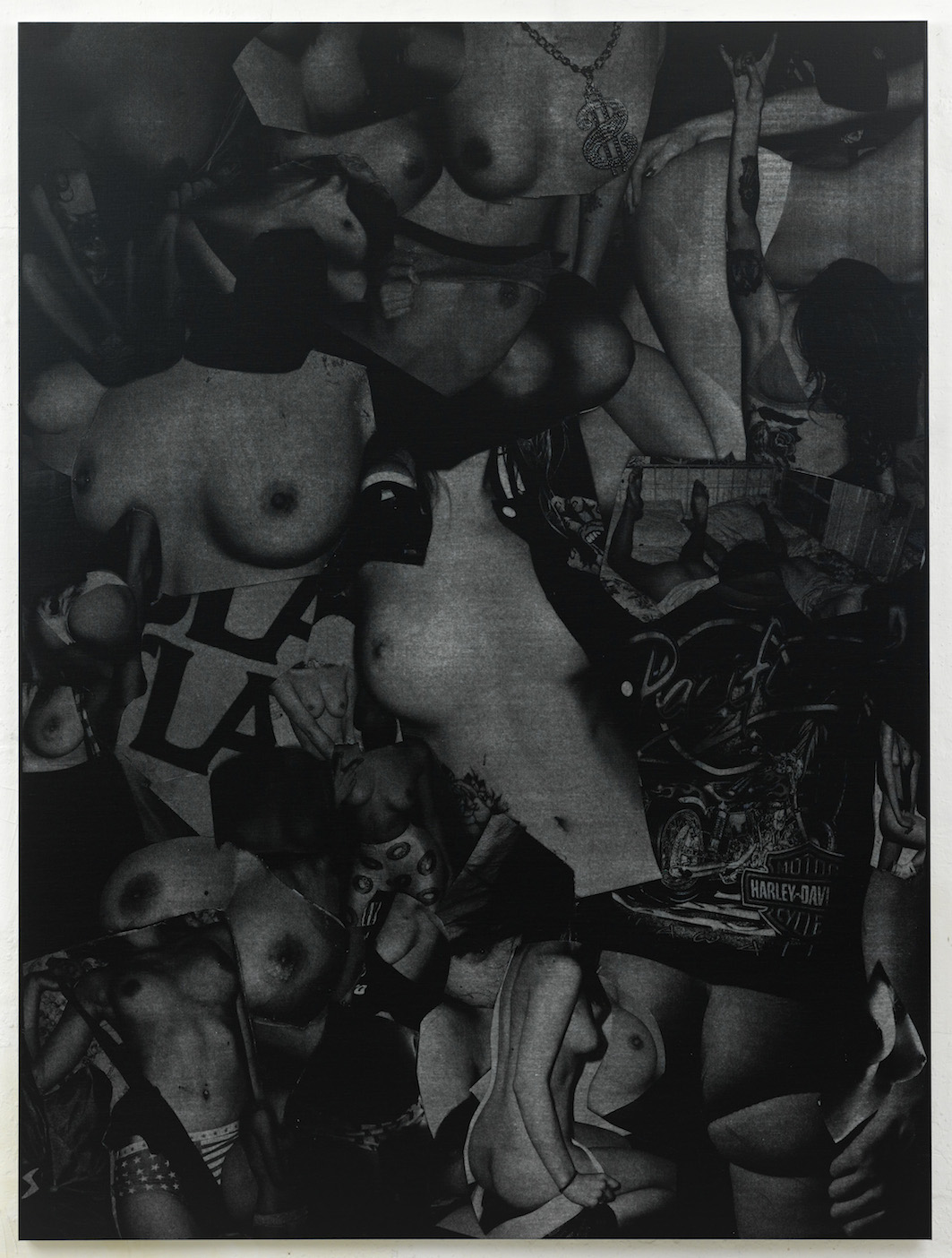 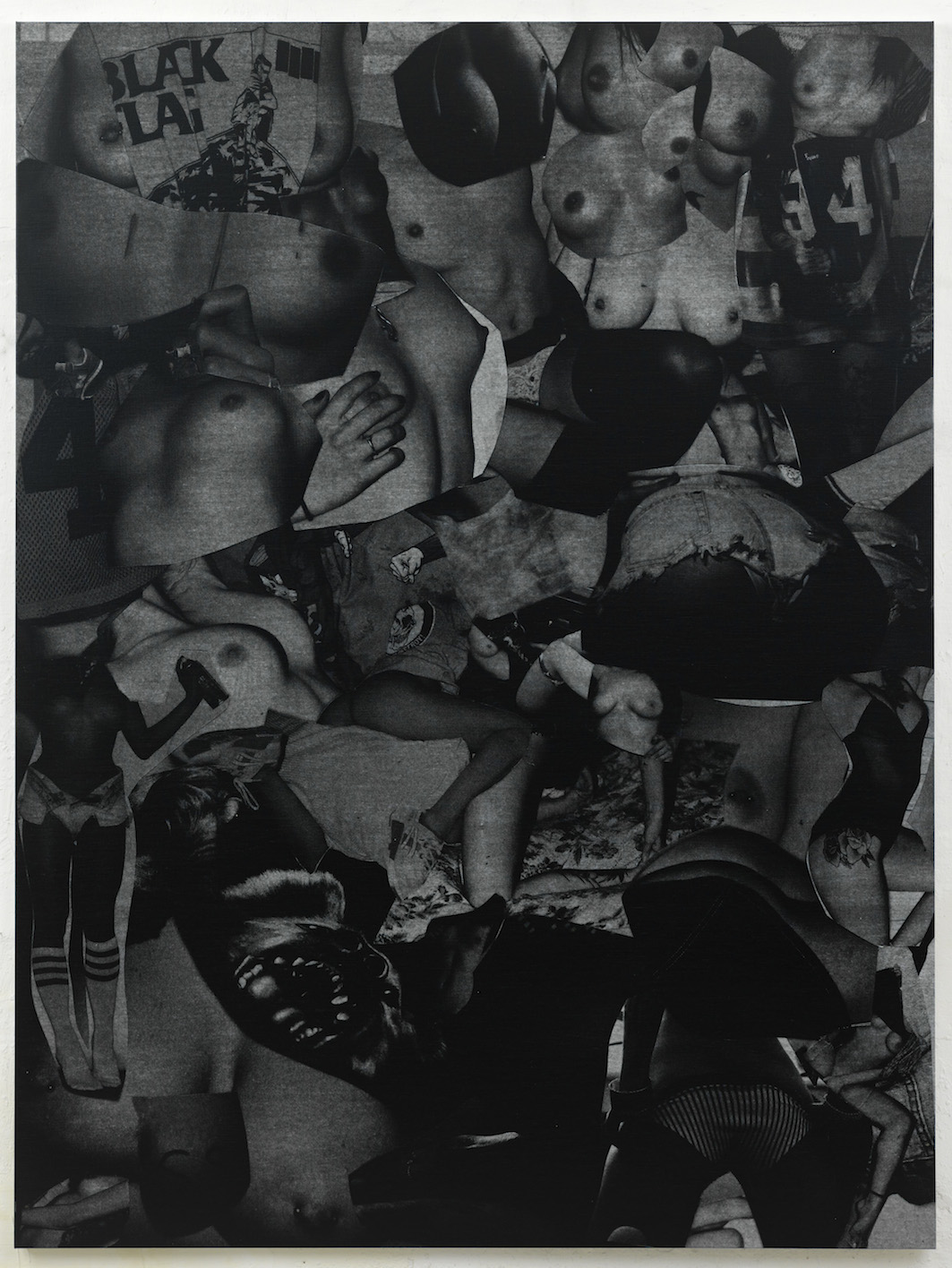 INFO
In his self-titled solo show at DUVE Berlin, Chris Succo exhibits a pared-down selection of two new bodies of work. At first glance these are yin and yang: the muted, whitewashed RG Paintings deflect any singular meaning through their abstract minimalism and flat formality; whereas the untitled silkscreen paintings – greyscale collages of fractured female nudes – are overloaded with highly literal, figurative content. This one-to-one pairing of works compresses the art historical dichotomy of figuration/abstraction into a flat moment of breakdown within that dual construction. Yin and yang collide, then coalesce.

Through a reductive process, Succo creates each RG painting by carving a jagged line into the surface layer of white paint to reveal the dark pigment beneath. The signage that emerges suggests a hastily scrawled signature, or a signature heartbeat pulsing across an electrocardiograph screen. The wavering line moves like the historical alternation between abstraction and figuration, a horizontal line with spikes at each banal historical turn, and the RG Paintings depict this nothing-time in a pseudo-linguistic gesture – what Roland Barthes would call “the gesture of inscription,” that is, an unvocalized pronouncement, a signature without a name attached.

With Succo’s silkscreen works this implied temporality comes to a halt. Their source material is cut from contemporary photographs, but through their silkscreened reproduction on canvas they gain a vintage aesthetic, flattening past into present. In their resemblance to graphic concert posters, they also reference the aesthetic of self-promotion, indicating the exposure of the body as well as the formal exposure of the image onto the silkscreen. No longer full figures, the exposed images of faceless bodies are truncated, inactive, and objectified. One considers the not-so-dissimilar modes of objectification of the female body in both pop cultural and art historical discourse.

But where is the heartbeat in the collages? Do these bodies have a pulse? The images extend off the sides of the canvas, as if we are simply seeing out a window into an endless sea of identical tits n’ asses. The bodies become landscape rather than figure. The ubiquitousness, and therefore banality, of these would-be intimate photos is overwhelming. Confronted with such nudity alongside the bare white paintings, one considers the banality of the distinction between abstraction and figuration.

Whereas Succo’s previous iterations of monochrome paintings were smeary, chaotic expressions of physicality – thick paint slapped on canvas – this new series tends toward the muted, the calm, the deliberate, and the self-aware. Yet their loud titles – SHAMELESS IS A TALENT, THE WORLD SUCKS IF YOU´RE SHY, and YOU LOOK LIKE NIRVANA JUST BROKE UP – allude to the flip-side of self-reflection, something akin to self-posturing, or a vain preoccupation with one’s own physical expression of emotion, which, like the silkscreens, is a function of self-exposure or fame.

In painting, the body leaves traces on the canvas in the form of the gesture, but in this exhibition this relationship between the bodily act and its trace is so estranged as to become the subject of the work itself. The content of the show hovers between the non-abstract and the non-figurative, in the negative space of the gesture, in the negative space of the body, as intimate as possible and yet as alienated.